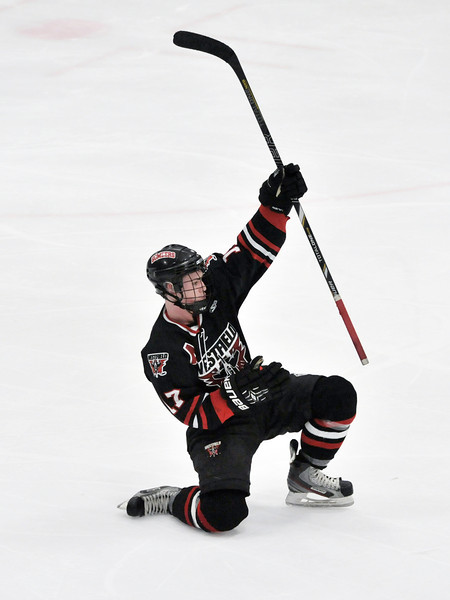 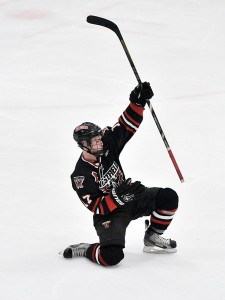 Westfield High School’s Chris Sullivan celebrates during the Western Massachusetts Division 3 championship. The Bombers are hoping to keep the good times rolling a bit longer when they begin defense of their state championship Thursday night against Shrewsbury in a semifinal game at the Mass Mutual Center in Springfield, beginning at 5:30 p.m. (Photo by Frederick Gore)

WESTFIELD – The Westfield High School boys’ ice hockey team is set to begin its run for a Division 3 state championship.
Westfield, fresh off winning its ninth Western Massachusetts title in 13 years with a thrilling 6-4 win over Agawam, returns to the ice Thursday evening against Central Mass champion, Shrewsbury, in a state semifinal game at the Mass Mutual Center in Springfield, beginning at 5:30 p.m.
Westfield was seeded second in the Western Mass title game, having lost to top-seeded Agawam twice during the regular season. The Bombers prevailed in the end though, surprising even some of their own players.
“Unbelievable,” said Westfield’s Chris Sullivan, who fueled the victory with a hat trick. “We were coming in as the underdog, but we showed what we can do.”
It would be silly to call Westfield an underdog again because no matter who the defending state champion Bombers play, they know, in the back of their minds, a trip to the Garden in Boston has become old hat.
The only question that remains is – will it take a hat trick to get there?