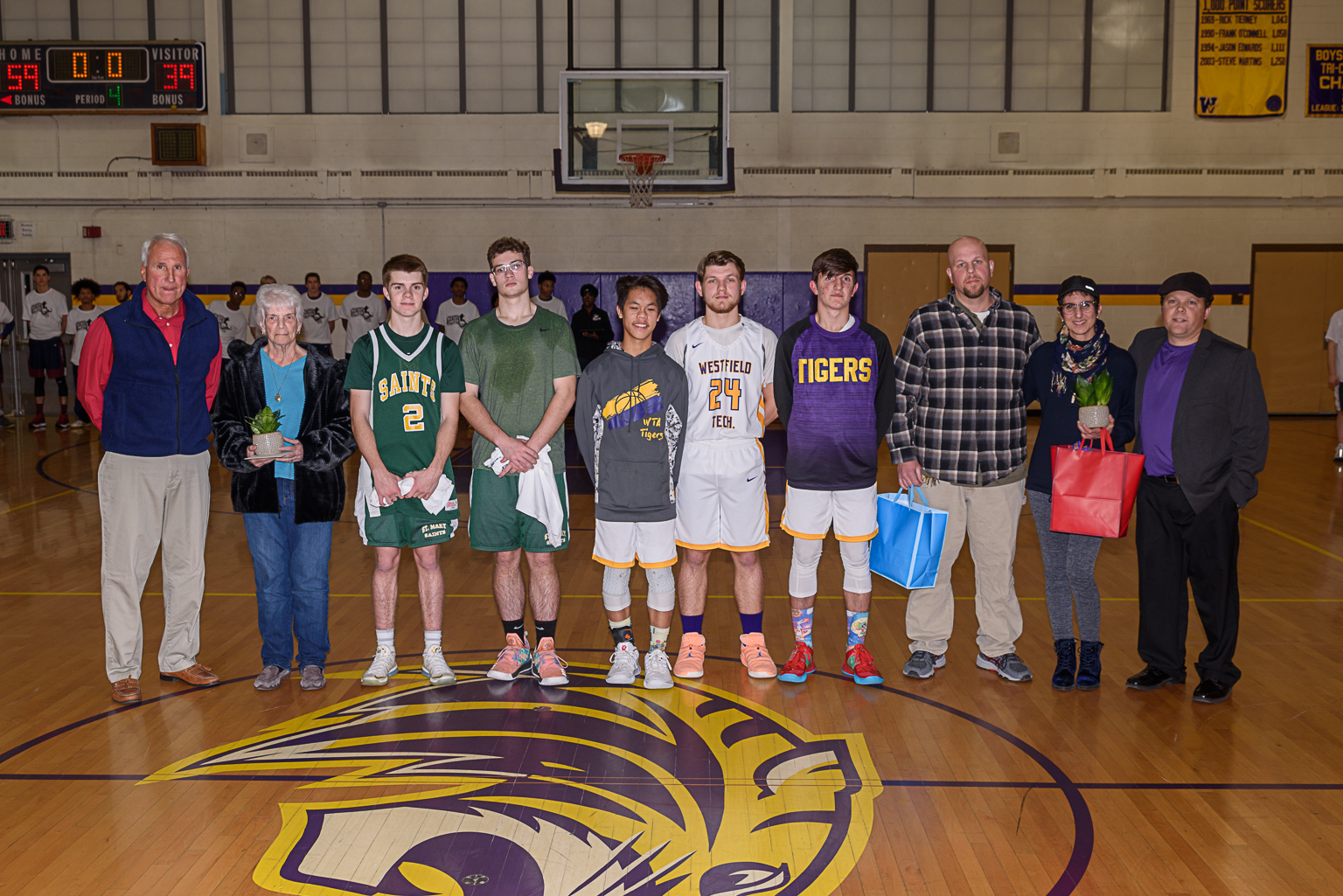 Representatives from the St. Mary and Westfield Technical High School boys basketball teams stand alongside their designated honorees, whose lives have been touched by cancer. (Photo by Marc St. Onge)

WESTFIELD – Yes, “W’s” and “L’s” were doled out following the completion of the 5th annual Box-Out Cancer Challenge Friday night at Westfield Technical Academy High School, but everyone was truly a winner as four boys basketball teams came together to battle against cancer.
“It’s a great cause,” said St. Mary’s coach Joe Molta, whose team fell 59-39 to Gateway in the tournament’s consolation game. “I’m glad to participate in it. It brings the community together.”
Jayden Santiago-Lopez made a concerted effort to lead Gateway, scoring a game-high 30 points. Gators’ Evan Cortis had 16. Mike Pepe led St. Mary’s with 16. Saints’ Brady Collins had 10. 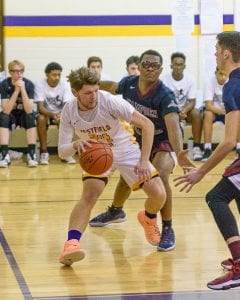 “Deep down, after (our players) got over the disappointment of the loss, we talked about life in general,” coach Molta said. “Basketball is a very small part of their life. If it helps them develop into being a solid citizen and a good young man and gets them an education, it’s great. As far as the cancer part, it makes us all aware as humans we are all vulnerable. It’s a scary thing, but something we all have to deal with. We do the best we can, but when it hits home, that’s when it’s really concerning.”
Having coached St. Mary’s for the last eight years and Southwick for 25 years prior to that, coach Molta often crossed paths on the court with longtime Westfield Tech coach John Wiley, who eventually lost a battle with cancer. This tournament, spearheaded by Westfield Technical Academy boys basketball head coach Kyle Dulude, is played in Wiley’s honor.
“John was a gentleman, a high school coach to model after,” coach Molta explained.
Each year, four participating schools play two games during the two-day tournament in honor of someone currently battling cancer or who fought the disease, but lost the battle. A portion of the profits from the annual tournament are put into a scholarship fund and given to a senior at Westfield Technical Academy each year in Wiley’s honor.
“After John lost his battle with cancer,” coach Dulude told the fans, players, coaches and families in attendance in a brief ceremony between games Friday night, “it reminded me to be there for other people.”
Dulude called for a unified effort for those in attendance to join the battle for cancer.
On the court, Hampden Charter School of Science wreaked havoc against the Whip City, first trouncing St. Mary’s Thursday and then delivering an early knockout blow to Westfield Tech in the final game of the tourney. The Wolves opened Friday’s championship bout with a 15-0 run and finished with a 69-46 victory.
Four players finished in double digits for HCSS. Inoah Lewis and Colby Ranck led the way with 16 points apiece. Curen’cee Smith had 14, and Jon Rosemond, 10.
Emil Sevastyanov and David Tikhonchuk each had nine for Westfield Tech. Tigers’ Josh Sturmer and Derien Wilson-Grant finished with seven apiece.
It was a sharp contrast from Thursday night when four Westfield Tech players reached double digits in the scoring column.
“I’m not sure if we just weren’t ready to play back-to-back nights,” coach Dulude said. “The shots just didn’t fall. We broke their press early, but missed the lay-ups.”
Westfield Tech won the third quarter 21-11, trimming the deficit to within seven points before Hampden Charter pulled away late.
“The shots didn’t fall and we were too slow on the defensive end,” Dulude said. The Tigers coach said he was especially impressed with the effort of both Sevastyanov and Sturmer.
Said Dulude: “We are going to focus on the 16 minutes we played well and just move on.”

Saints scratch ‘Cats in opener
St. Mary’s 36, Sci-Tech 23
Anna Kosinski and Emma Goodreau scored nine points apiece to lead St. Mary’s to a season-opening victory on the road. Saints’ Jessica Crosby finished with six; Kaylee Hamel and Paighton Ramos each had five.
“Our defense really kept them from getting inside,” St. Mary’s girls basketball head coach Rodney Rodriguez said. “It was all about defense and rebounding tonight. Our goal was to take as many shots as we could and it paid off.” 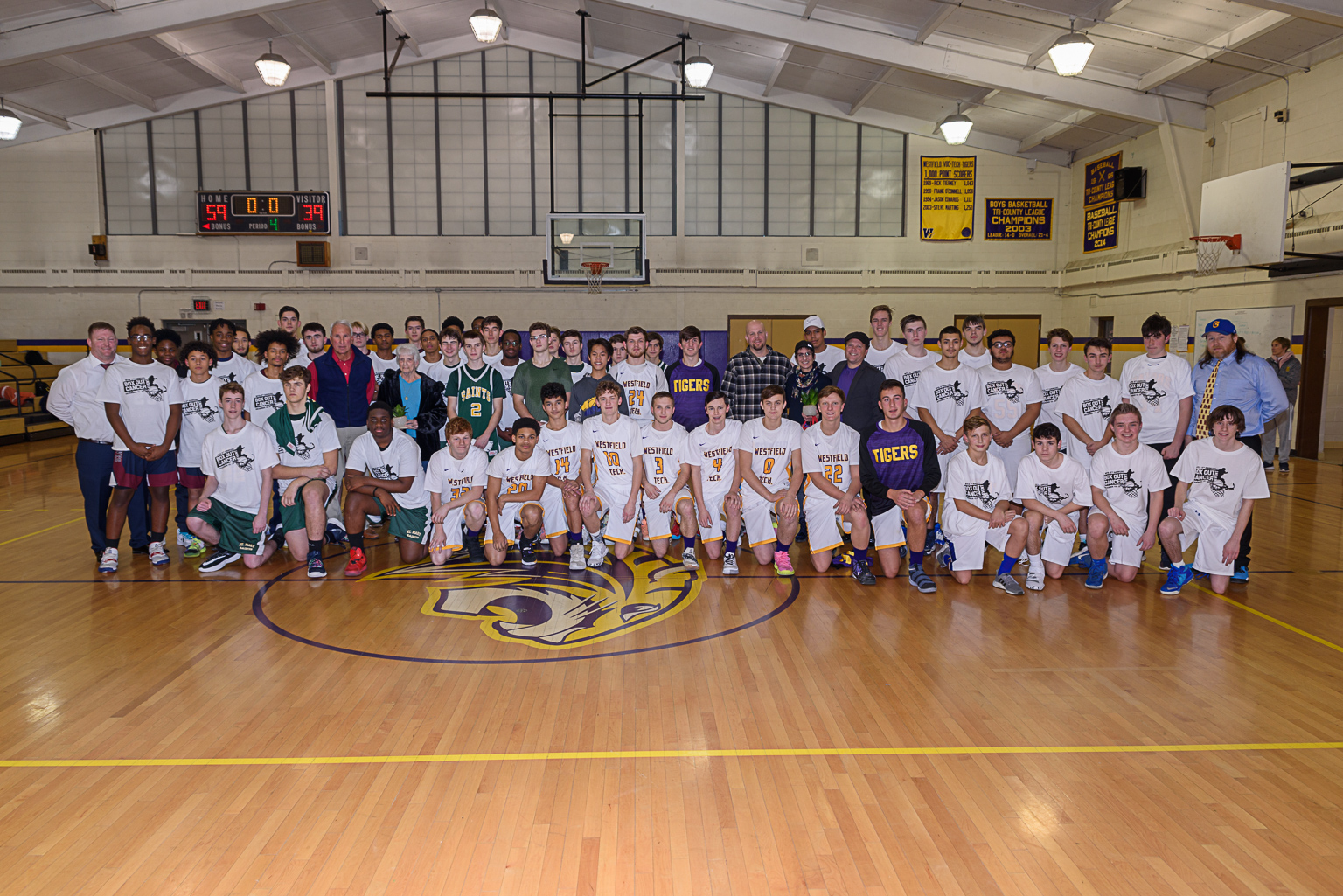