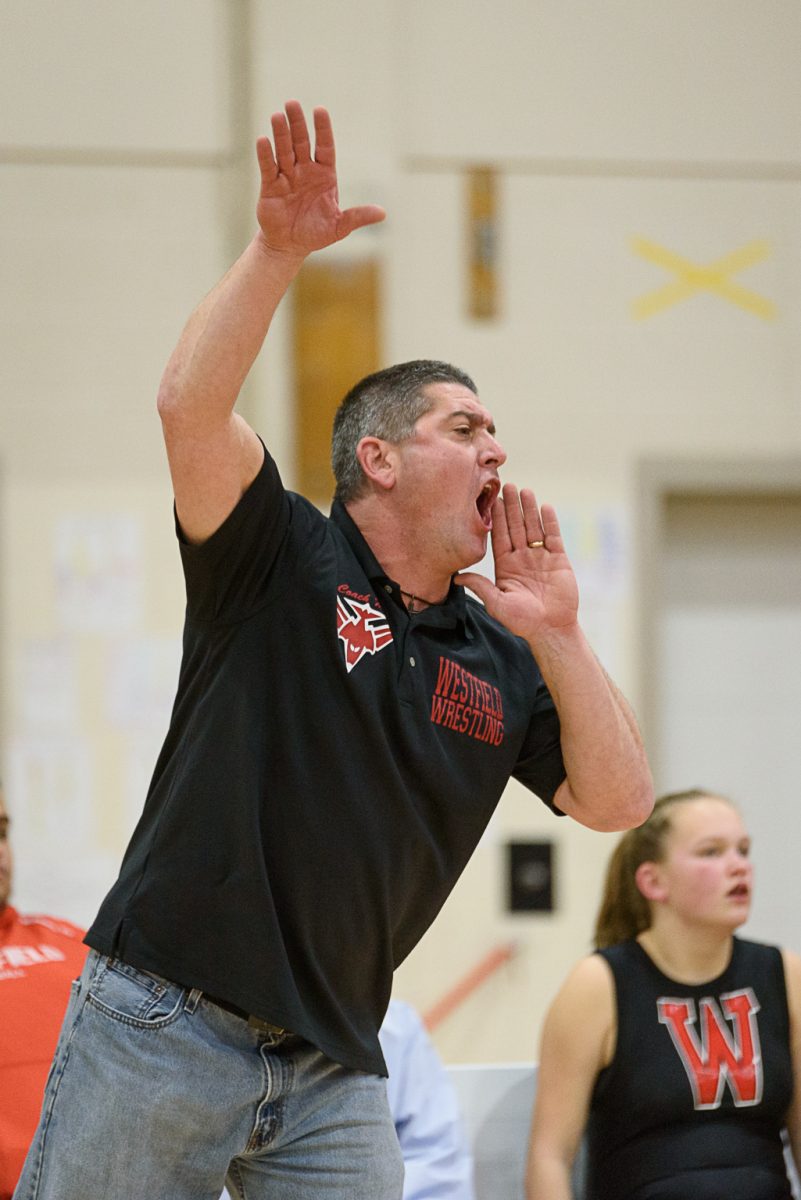 WESTFIELD – The Massachusetts Interscholastic Athletic Association recently voted to go forth with basketball, ice hockey, swimming and diving, and skiing this winter. A decision was then made by the Pioneer Valley Interscholastic Athletic Conference to begin the season Jan. 4, but that still left some sports out in the cold.
Indoor track and field was moved to the floating “Fall II” season, joining football in late February, and a decision was made by the MIAA to move wrestling to the spring.
It was obvious all along that wrestling would be held off, at least until the spring, because Level 3 guidelines set forth by the state in regards to the coronavirus do not allow for contact sports, primarily due to social distancing. In effect, like football, wrestling was considered a “high-risk” sport. 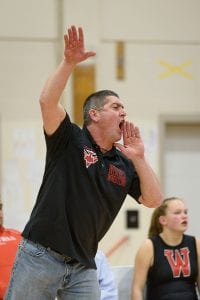 Westfield wrestling head coach Chris Malinowski shouts words of encouragement to his wrestlers during a 2018-19 home meet. Malinowski and the Bombers will have to bottle up that enthusiasm for a few more months as wrestling season has been delayed due to the coronavirus. (THE WESTFIELD NEWS FILE PHOTO)

The MIAA weighed the option of moving wrestling to the “Fall II” season, joining football, indoor track, and cheerleading, but nixed that idea after discovering that would create a conundrum for several wrestlers, who also play football.
The MIAA conducted a poll of 40 wrestling schools, some 1,100 wrestlers and found that several of its student-athletes would be forced to give up one sport if made to choose between the two.
“I am happy that there was a decision made to let us at least have a season, a chance to get on the mats for competition,” said Westfield High School football coach Chris Malinowski.
Malinowski said that although the decision to keep student-athletes from choosing between wrestling and football was the right one, he expressed concern that some wrestlers could opt for lacrosse instead if the two seasons overlap.
The Fall Sports II, or “floating,” season is currently scheduled to take place from February 25 through April 25.
The postponement of indoor track was not due to safety concerns, according to MIAA officials, but rather one made because of a lack of facilities for competition. Several area colleges remain closed as well as the Reggie Lewis Center in Boston due to the COVID-19 pandemic with no timeline for reopening.