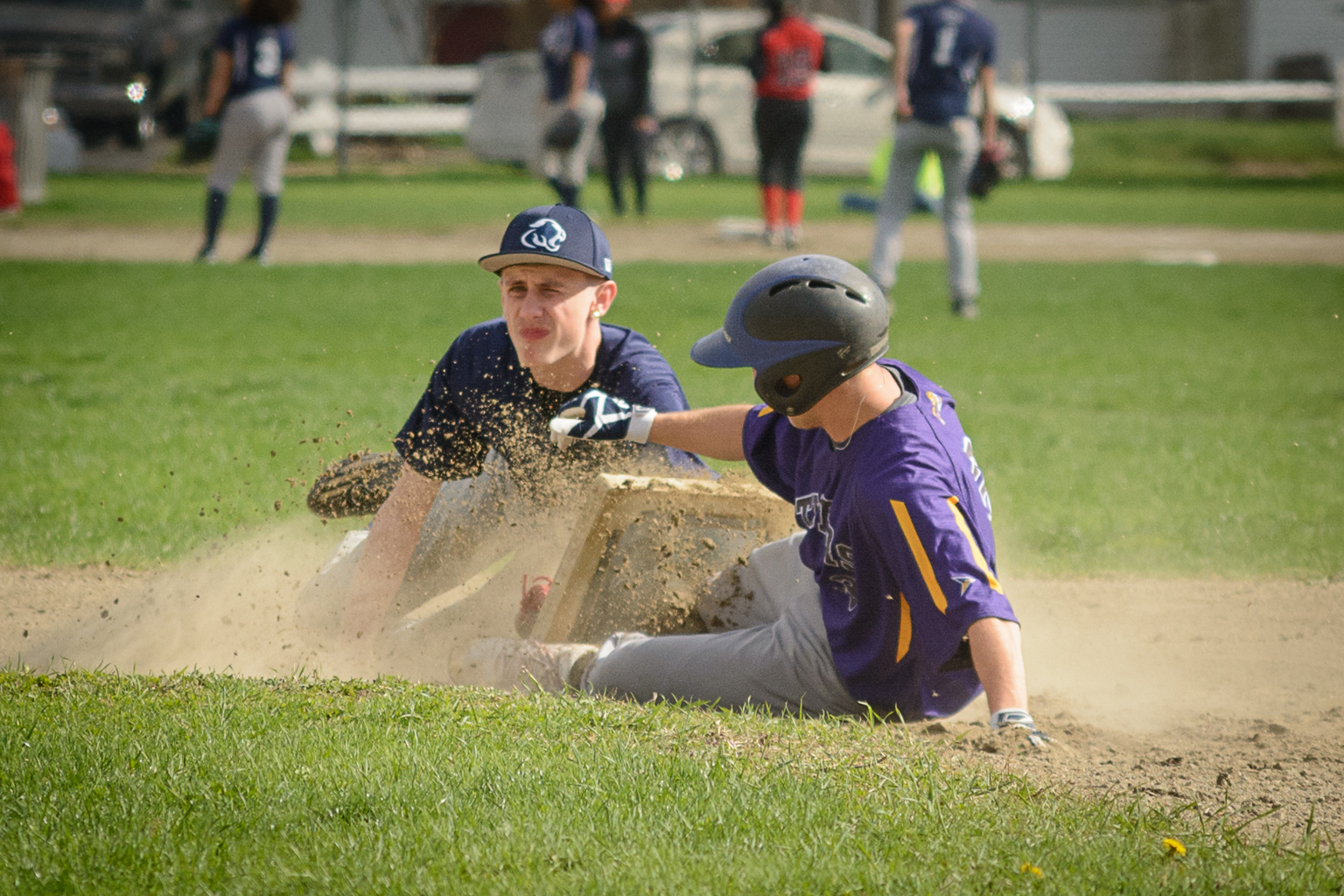 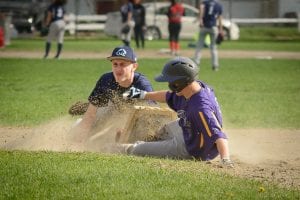 Mateo Sanchez (3) tears up the base as he makes it safely to second Wednesday against Sci-Tech at Marshall Roy Field. (Photo by Marc St. Onge)

SPRINGFIELD – They have done it again!
After spotting the Sci-Tech baseball team a 9-1 lead, the Westfield Tech Tigers rallied for 10 unanswered runs to stun the Cybercats 11-9 Wednesday at Marshall Roy Field.
“I’m impressed with their resiliency,” Westfield Technical Academy head baseball coach Bob Eak said of his Tigers (5-1), who completed their third comeback victory of the season. “They never give up. They have a don’t-accept-losing attitude.”
Westfield Tech exploded for four runs in the fourth inning, five in the fifth, and one more in the sixth. Darryl Reopel (2-for-3, 3 RBIs), Brody Zabielski (hit, 3 runs), Josh Sturmer (hit, RBI), and Mateo Sanchez (3 runs) provided the bulk of the offense.
Zabielski came on in relief to toss four scoreless innings and earn the victory. He allowed just one hit, walked none, and struck out four batters.
“I’ve had teams in the past down 5-0 that would’ve folded, never mind 9-0,” coach Eak said. “These kids know they’re never out of it.”

Lis lifts Rams in extras
Southwick 4, Hampshire 3 (8 inn.)
Josh Lis hit a bases-loaded single through the right side of the infield to lift Southwick in extra innings.
Johnny Cesan reached first base, advanced to second on an error, and after Josh Burnett walked, moved to third on a Bart Shea single before scoring the game-winner.
Shea finished the game 2-for-3 with a run scored and an RBI. Burnett also doubled and scored a run. Josh Sylvia (walk, run scored) and Sam Mizonoglu (2 runs) each went 1-for-2.
Shea struck out 10 batters over 5 1/3 innings. He scattered three hits, yielded six walks, and allowed three runs (all unearned). Dan Burnett picked up the win in relief. He tossed 2 2/3 innings of scoreless ball with five strikeouts, no walks and no hits.

SOFTBALL
Penland homers in Rams’ runaway
Southwick 13, Gateway 1
Brittany Penland went 3-for-4 with a homer, three runs and two RBIs to lead Southwick. Rams’ Devan Fox (2-for-4, 3 runs, RBI) and Sydney Gorman (2-for-4, 2 runs, RBI) each tripled and Jillian Gentile (2 runs) had a double.
Southwick pitcher Sarah Hough scattered five hits and recorded nine Ks.
Stephanie Paiva was perfect at the plate for Gateway, going 3-for-3 with a run scored. Gators’ Ava Auclair had a hit and an RBI. Lily Waters had the team’s other hit.