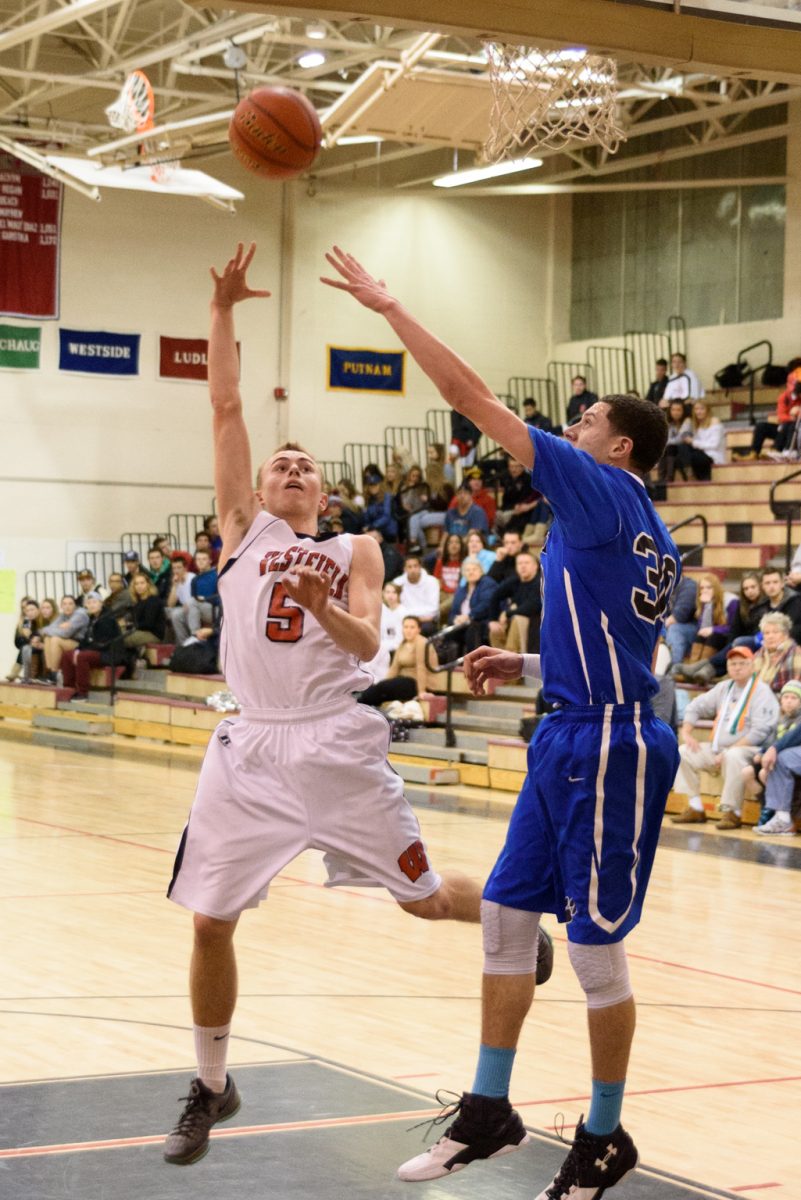 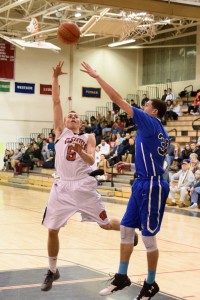 Westfield’s John O’Brien (5) launches a one-handed floater in the lane over the arm of a West Springfield player Monday night. (Photo by Marc St. Onge)

WESTFIELD – It appears that the Westfield High School boys’ basketball team has saved the best for last.
Westfield kept its postseason hopes alive with a 65-54 win over visiting West Springfield Monday night. John O’Brien and Gabe Piepergerdes scored 22 and 11 points, respectively, for the Bombers (7-10).
“We played really good defense against a tough team,” Westfield coach Joe Balestracci.
Eric Faniel was one of the lone West Side players to shake loose on the offensive end of the court. Faniel finished with 27 points.
Westfield’s quest for the postseason will continue Thursday at Northampton High School, followed by games at Chicopee (Feb. 22) and at East Longmeadow (Feb. 25).
The Bombers, as with any tournament-hopeful, must finish with a .500 or better record, or first or second place in their respective leagues. 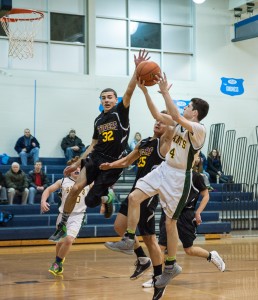 Westfield Technical Academy’s Andrew Czerechma (32) extends an arm as he attempts to make a soaring block on a shot from Alex Qiu (4) Monday night at Westfield Middle School South. (Photo by Bill Deren)

Wood, Tigers down Saints
Westfield Technical Academy 65, St. Mary 33
Matt Wood made six straight 3-pointers in the first half as Westfield Tech built a 44-16 lead through two quarters at Westfield Middle School South. Wood finished with seven 3s, and the Tigers soared.
“They just had a fantastic first half,” St. Mary coach Joe Molta said. “In the second half we played much better but by that time it was too late.”
With the victory, Westfield Tech improved to 8-9 and now needs just two wins to earn a tournament berth. The Tigers host Smith Vocational Thursday at 6:30 p.m., before closing out the regular season with games against Pioneer Valley Christian (Feb. 19) and Pathfinder (Feb. 22).