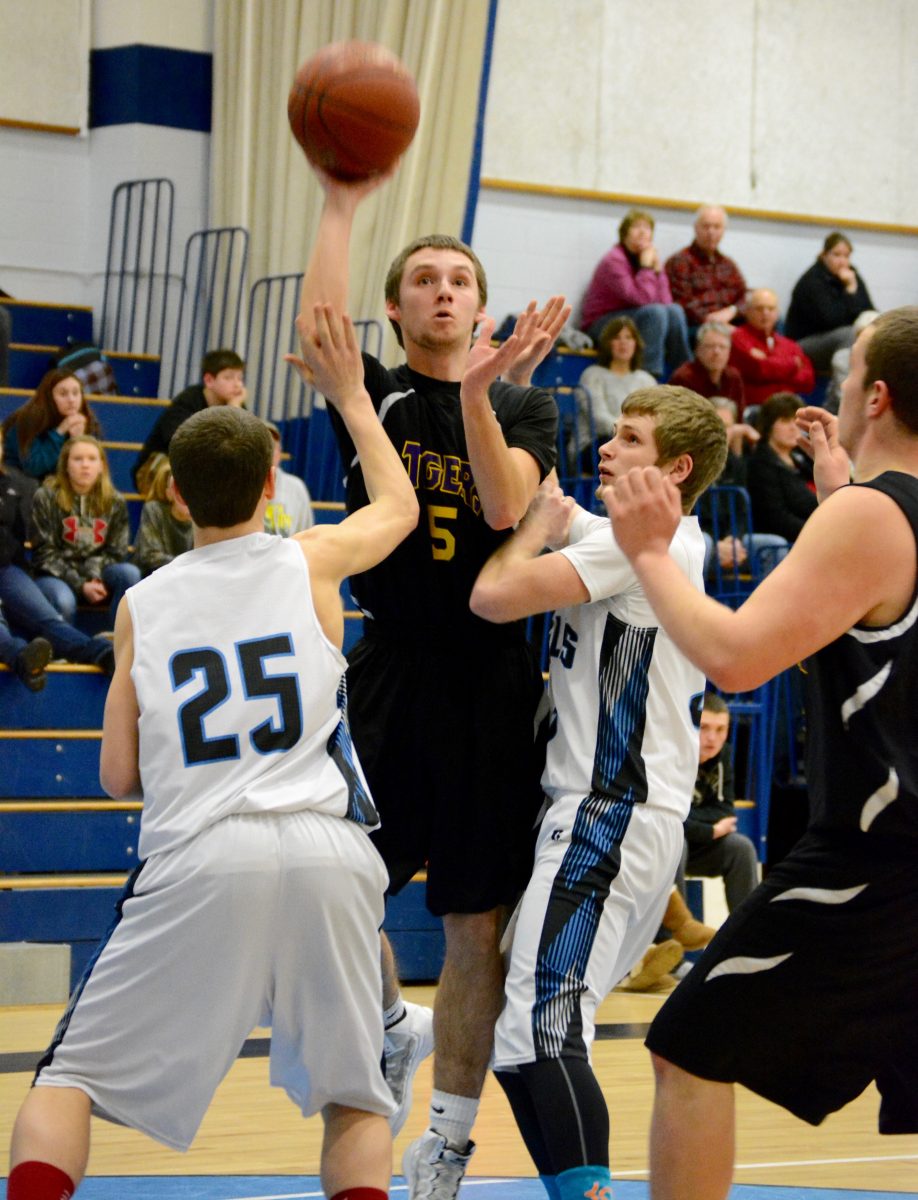 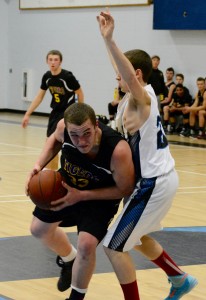 TURNERS FALLS – The Westfield Technical High School boys’ basketball team had an electric streak to end the regular season. Unfortunately for the Tigers, they could not catch lightning in a bottle this postseason.
Colin Gould scored a game-high 16 points and fifth-seeded Franklin Tech held off an extremely scrappy, determined Westfield Tech team (#12 seed), 53-44, in a Division 4 tournament opener Tuesday night.
Tim Shevchenko, who got into foul trouble early in the game, nearly single-handedly helped Westfield Tech (11-10) overcome a double-digit deficit with a 11-point, third-quarter outburst, and Matt Wood pumped in seven in the fourth but it was not enough.
Westfield Tech coach Kyle Dulude said his team’s slow start set them back from the outset. 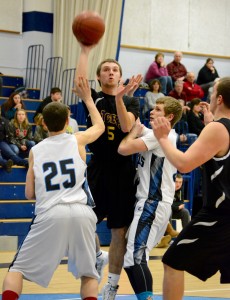 Westfield Tech’s Matt Wood, center, puts up a one-handed jumper in between the Eagles’ defense Tuesday night in a road playoff game. (Photo by Chris Putz)

“It took a while to get the rust off,” said Dulude, whose team had not played in nearly a week after finishing the regular season on a six-game winning streak. “We came out of half-time, played a great third quarter and then ran out steam.”
Westfield Tech rallied from a 26-16 deficit with a 13-0 run to take a 29-26 lead late in the third quarter. Shevchenko scored nine points during the run, in between a pair of two-pointers from Alex Stepanchuk (8 points), a baseline drive and a one-handed floater.
Alex McBurnie brought Franklin Tech (16-4) within one point with his only basket of the game with 1:26 remaining in the third quarter, an aggressive drive down the lane. Shevchenko responded for Westfield Tech, converting two free throws with 47.4 ticks left in the quarter. Franklin Tech answered back with a 3-pointer from Tyler Hastings (9 points) to send both teams into the final quarter tied at 31-all. 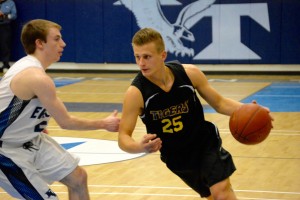 Westfield Tech forced some shots on a half-dozen possessions early in the fourth quarter, and found themselves trailing.
An 8-0 run from Franklin Tech, fueled by treys from Gould (from beyond the arc) and C.J. Daignault (an and-one), put the Eagles up 46-35 with 4:01 remaining in regulation. The closest Westfield Tech could close the gap to in the final four minutes would be nine points.
“Shots did not fall and we didn’t get to the line,” coach Dulude said.
Still, Dulude applauded his players for a tremendous effort in their tournament game and a fine effort by showing huge improvement all season. He also commended Luis Santos and Luis Ruiz for solid efforts off the bench.
“We never gave up,” Dulude said. “That is the trait and character I will remember.”