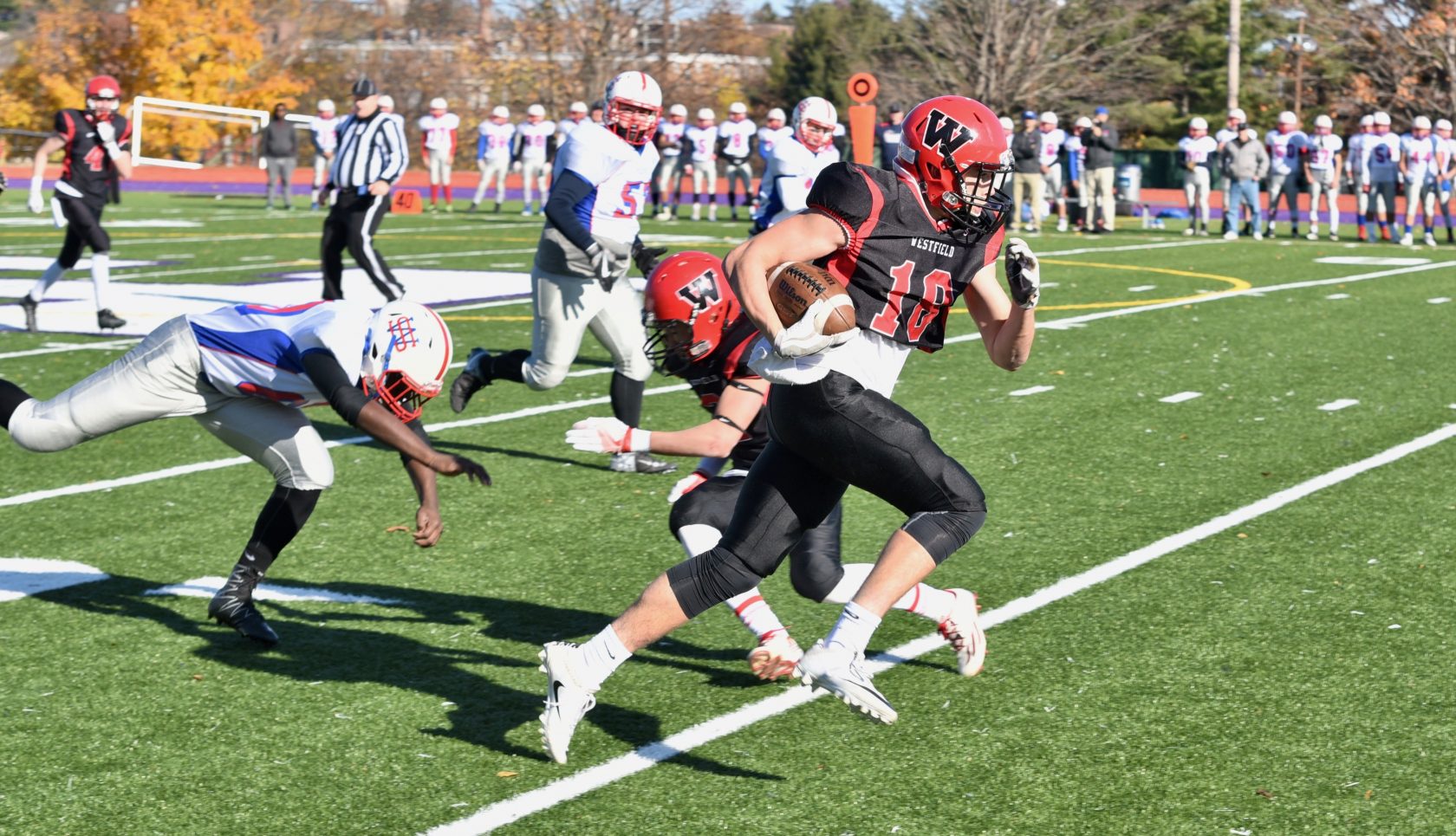 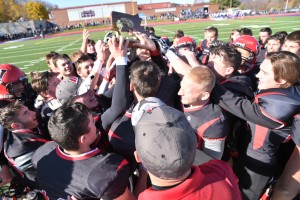 WEST SPRINGFIELD – From despair and desolation … to celebration.
The Westfield High School football team has risen from the ashes, completing a reversal of fortunes to win its first championship in recent memory.
Westfield knocked off West Springfield 40-16 in a penalty-marred Division 2 West Sectional Saturday at Holyoke High School. Bombers’ senior Zach Adam had two defensive/special teams scores, and senior running back Wilton Royal scored three times.
“This season has been special,” said Westfield coach Rob Parent, who helped resurrect the school’s football program after a brief backslide. “The players sold out and bought in.”
During the 2014-15 seasons, Westfield went 0-14 in conference play. The Bombers went 7-1 this season, losing only at Central. They avenged that loss a week ago in a playoff semifinal against the Golden Eagles, and completed the turnaround Saturday.
“We definitely put in the work, grinding in the gym in the offseason,” said Adam, who made one highlight reel play after another.
West Springfield came out running what appeared to be a vanilla game plan early, handing off to running back Kyle Bean on four consecutive plays to begin the game. A holding penalty and an 11-yard loss on third down curbed those plans quickly. 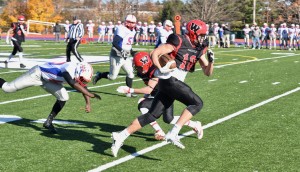 West Side punted on fourth down, and Adam returned the ball 69 yards for a touchdown. The score came with 6:49 on the first quarter clock.
Adam’s return skills paid dividends again, setting up Westfield deep in West Springfield territory with a 53-yard punt return. Two series later, senior quarterback Austin St. Pierre found Royal for an 11-yard catch-and-run touchdown with 1:58 remaining in the quarter.
West Springfield fumbled the ensuing kickoff, giving the ball to Westfield at the Terriers’ 13. Royal took the first handoff of the series and sprinted 13 yards untouched for the touchdown with 1:42 left in the quarter. The Bombers led 18-0.
With memories of a regular season smack down fresh in their minds, the West Springfield Terriers jolted out of their slumber.
West Springfield drove the ball 91 yards in just five plays, scoring on a 31 yard touchdown pass from Tyler Rochefort to Cameron Paier seven seconds into the second quarter. The key play on the drive featured a 42 yard run from Rochefort.
West Springfield opened up its next possession with great field position due to a botched punt. The Terriers scored on third down when Rochefort ran it in from 18 yards out. With a successful two-point conversion, they led 18-16 with 7:01 left in the half.
Momentum appeared to swing completely on the side of the red, white, and blue … at least until Adam made another first-half play, returning an interception 42 yards for a touchdown with 1:45 left. After a two-point run, Westfield led 26-16.
Both teams’ offenses sputtered in the second half. It wasn’t until early in the fourth quarter that Westfield finally broke the stalemate – with a defensive play. Bailey Collier blocked a punt deep in West Side territory and jumped on the ball in the end zone for a touchdown with 10:05 remaining in regulation. The Bombers led 34-16 after the two-point conversion.
Westfield tacked on a TD in the final minutes when Royal scored on a 24-yard run. The rest was history.