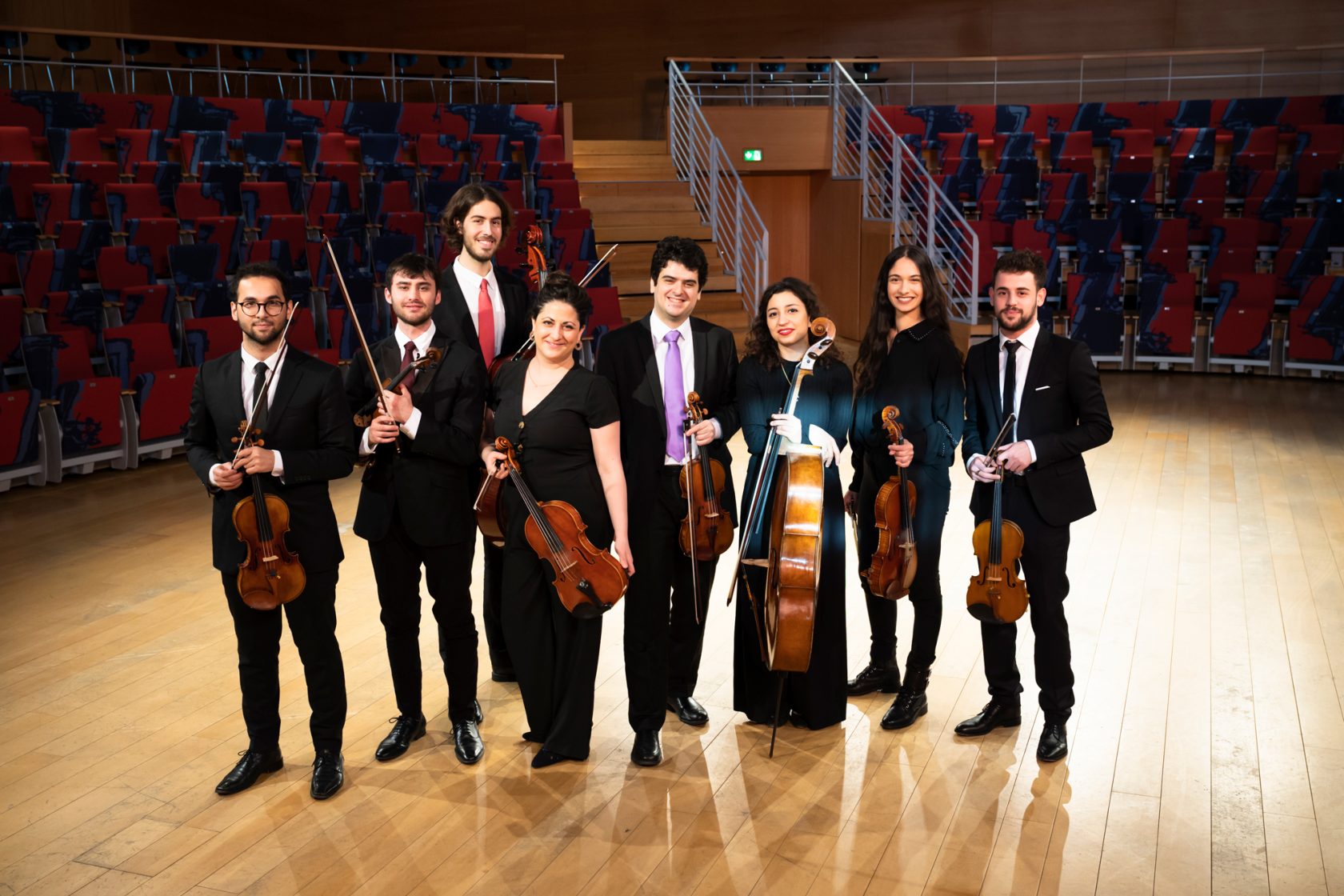 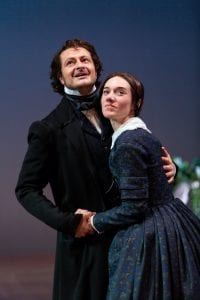 Hartford Stage has come up with a new vision of the literary classic, Jane Eyre, as adapted and directed by Elizabeth Williamson. This 1847 novel, the story of a young woman who becomes a governess and falls for her employer, was one of the first of its genre to explore femininity, religion, sexuality, and class, and it changed the trajectory of English-language literature, which now reveres 19th century authors Jane Austen (whose Pride and Prejudice is onstage at West Hartford’s Playhouse on Park) and Louisa May Alcott’s Little Women (on screen in area theatres).

I know that Jane Eyre is often required reading for many high school students. I’d never read Jane Eyre in school, never saw one of the many film adaptations, nor the opera or ballet. So, I walked into the performance with no background other than the press release, and access to the Stage Notes, provided on Hartford Stage’s website…a superb primer of the show. Not knowing the characters, the plot, or the spoilers made the production unfold with surprise.

Jane Eyre has inspired many adaptations, at least a dozen film versions going back to the silent film of 1910 to the present; two operas, and the Cathy Marston ballet on the seasons of Joffrey Ballet and American Ballet Theatre. And whether spoken, sung, or danced, this heroine’s story, here narrated by Jane herself, shows a strong-willed woman, who rises from abuse and negativity to become independent and make her own choices. Williamson’s adaptation is faithful to the original novel, and her direction is flawless. 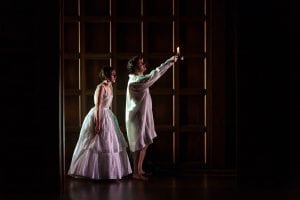 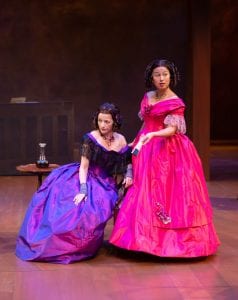 Nick Vaughan, who has designed Williamson’s productions of Henry V and Seder at Hartford Stage, has designed a heavy, dark-stained wood series of panels and doors (which reminded me so much of the classrooms where I studied theatre history at Yale). A revolving stage changes scenes. Ilona Somogyi’s costumes, all intricate period pieces are superlative. We were seated down front, and I noticed her handiwork up close. It was a marvel. As a footnote, Somogyi is one of the area’s most versatile costumers. I’m still in awe of her work on Goodspeed’s The Will Rogers Follies. Isabella Byrd’s lighting plays off then brooding dark wood sets to great effect, and Matt Hubbs and Christian Frederickson, who provided sound and music for Seder, are in top form here.

Helen Sadler, as Jane Eyre, gives one of the most memorable performances I’ve seen at Hartford Stage. As both narrator and the character she writes about, she gives Jane a combination of innocence, determination, strength, and insecurity. Chandler Williams, as Rochester, Jane’s boss and later love interest, captured the nuances of the role, although at times, a bit over the top. The final scene, a reunion of Jane and Rochester, is terrific. Meghan Pratt as young Jane and Adele, a young girl who is tutored by Jane as her governess, is a stand-out. The ensemble, Marie-France Arcilla, Grayson Dejesus, Megan Gwyn, Felicity Jones Latta, and Steve Routman, all playing multiple roles, are strong. 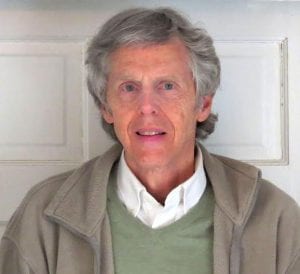 Stan Freeman, author of The Pitch at The Majestic Theater.

‘The Pitch’ premieres at The Majestic Theater, February 27-April 5

Playwright Stan Freeman was the science and environmental writer for The Republican for nearly 25 years. His articles have also appeared in the San Francisco Chronicle, Seattle Times, Houston Chronicle, New Orleans Times-Picayune and St. Louis Post-Dispatch. He studied fiction writing in the MFA program at University of Massachusetts. His historical novel, The Dutton Girl, was published by Coffeetown Press of Seattle in 2018.

The Pitch, according to Freeman and Eaton, tells the story of retired sportswriter Roger Pennell (played by actor John Haag) who reluctantly agrees to collaborate with a young reporter, Mike Resnick (played by Julian Findlay), on the biography of a boyhood friend of Roger’s. That friend, Vernon Peters, was a pitcher who had been languishing on a farm team for the Yankees, but finally got the call that brought him to the mound at Yankee Stadium. Peters threw only one pitch that day, and his career in the Major Leagues abruptly ended. In digging into the story, the young writer discovers a secret at the heart of it all, a secret the older writer fiercely intends to protect.

Eaton says the play may tour after its West Springfield run, a first for The Majesrtic. To view the trailer: https://www.youtube.com/watch?time_continue=1&v=9UZh_wV5aH0&feature=emb_logo

Barrington Stage has added Arthur Miller’s The Price to its season. Julianne Boyd will stage the classic, which runs October 1-18 on the Boyd-Quinson Mainstage in downtown Pittsfield. For details: www.barringtonstageco.org. 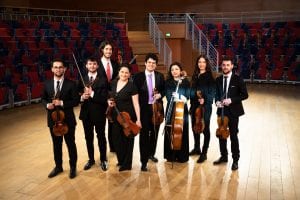 The West-Eastern Divan Ensemble, led by the orchestra’s concertmaster Michael Barenboim, visits Bowker Auditorium at UMass Amherst on March 2. The Ensemble, members of a larger orchestra founded in 1999, and featuring Arab and Israeli musicians, will perform works by Brahms and Mendelssohn as well as new work by Benjamin Attahir. For details: www.fineartscenter.com.

Hartford Symphony Orchestra performs Dvorak’s Symphony No. 8 on its March 13-15 concerts at The Bushnell. The program, conducted by Julius Williams, also includes music by Coleridge-Taylor, Williams, and Lalo. Leonid Sigal is violin soloist. For details: www.hartfordsymphony.org.

Hitch, a new play by James McLindon, gets a staged reading at Playhouse on Park in West Hartford on March 1. A talk-back with the playwright, cast, and director follows. For details: www.playhouseonpark.org.