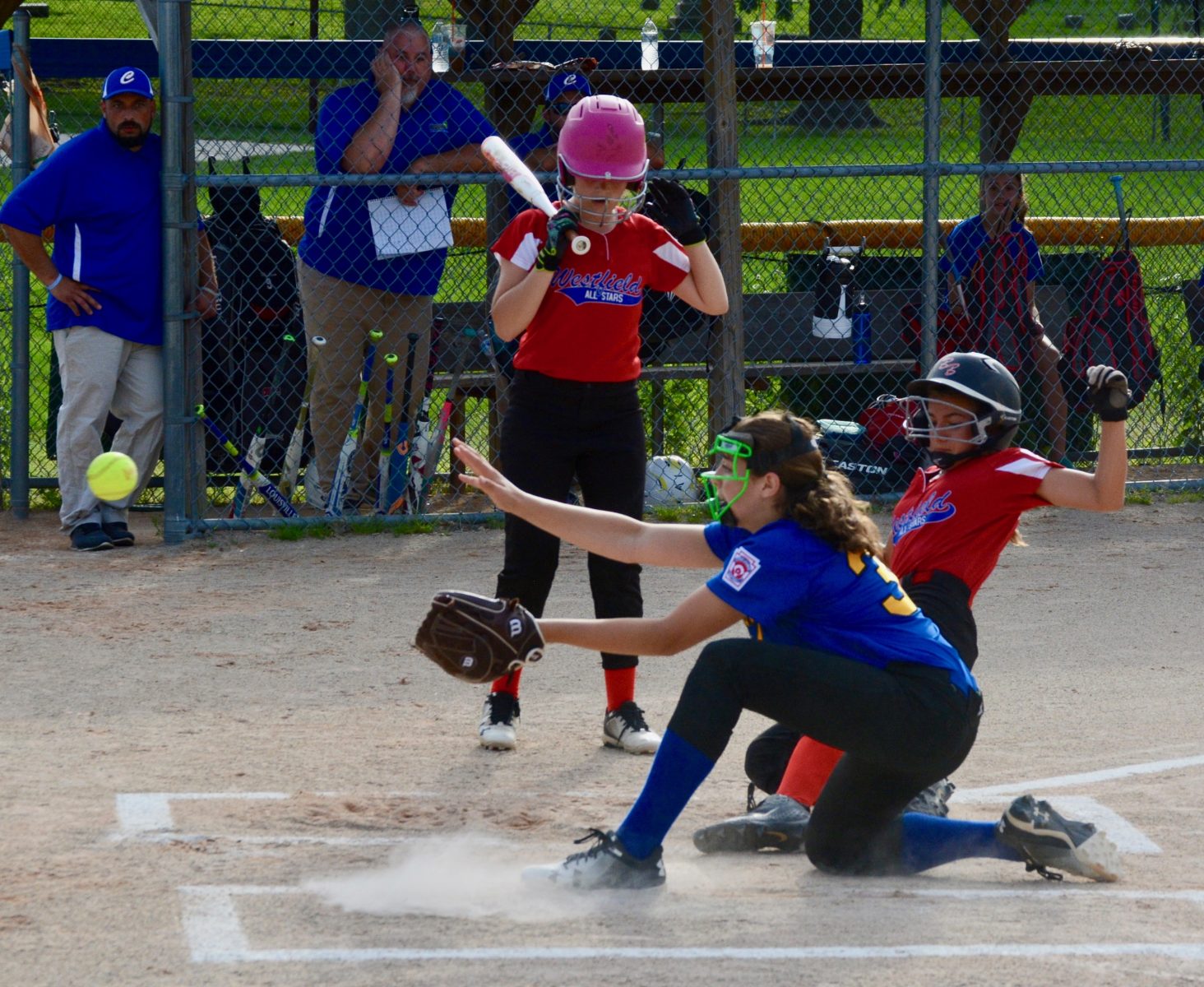 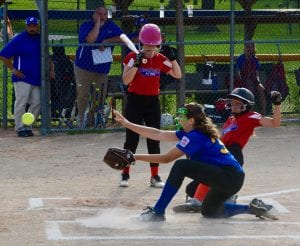 CHARLTON – The Westfield Little League Softball 12U All-Stars did not let a potential roadblock get in their way of a positive journey in the sectionals.
Westfield scored five unanswered runs to defeat Charlton 11-6 on the road Tuesday night.
Westfield set the tone early, roaring out of the gate with lead-off batter Kelsey Bouchard (3-for-3, 3 runs, RBI) smashing a triple and scoring on a wild pitch for the first run. The two teams battled to a 6-6 tie before Westfield unleashed a blistering attack that Charlton was unable to recover from.
In the fourth inning, Cam Lemelin (double, 2 runs) drew a one-out walk. Bouchard singled. With runners on second and third, Rachel Bonfitto (2 runs scored) ripped a two-run single. Camille Bruno (1-for-1, 2 runs scored, RBI) walked. Rachel scored on a fielder’s choice by Shea Hurley (2 RBIs). Camille came around to score on a wild pitch.
Westfield led 10-6.
Ava Pederson went 1-for-2 with two runs scored for Westfield. Allie Stucenski had a RBI.
Bruno recorded six Ks, allowing just one earned run (6 unearned) on five hits and three walks in four innings. Hurley slammed the door shut with two shutout innings, allowing one hit and striking out four batters.

LITTLE LEAGUE BASEBALL
12-YEAR-OLD ALL-STAES
Westfield shuts out Longmeadow to close out pool play 4-2
Westfield 10, Longmeadow 0
Patrick Willard ripped a pair of doubles as Westfield posted a convincing victory at Kiwanis Field to close out pool play with a 4-2 record. Willard finished with two RBIs and two runs.
Westfield advances to the double-elimination portion of the tournament.
Joe Maffia went the distance on the mound for Westfield, scattering two hits over four innings. Maffia struck out three and was backed up by a flawless defense throughout.
Willard and Wagner collected doubles in the second inning to fuel a 4-0 advantage. The hosts then scored six times in the fourth inning to close things out. Nate Blackak drove a two-run triple to deep center field to cap off the rally.
Wagner finished the game 2-for-2. Ethan Connors, Tyrus Traska, Nick Gauger (double), Josh Drumm and Jose Davis also had hits for Westfield.

AMERICAN LEGION BASEBALL – JUNIOR DIVISION
Westfield posts thrilling victory
Westfield 8, Agawam 7
Despite back-to-back losses and some all-too familiar shaky defense, the Westfield Post 124 Juniors (5-3) bounced back to record a walk-off victory over Agawam Post 185 Tuesday night at Jachym Field.
Agawam jumped out to an early 1-0 lead in the first inning without a walk or hit and left the bases loaded as Westfield starting pitcher David Tirrell struck out the last batter of the inning.
Despite a leadoff walk drawn by Josh Sturmer, Westfield went quickly in the bottom of the frame, stranding the tying run at third base.
Agawam tacked on another run in the top of the second but Westfield answered with a two-out walk by Brody Zabielski, a stolen base and a RBI single to right-center by Jagger Paroline to plate the speedy Zabielski.
Agawam tacked on two more runs in the top of the third, extending its lead to 4-1.
Not to be outdone, the Westfield bats came alive in the home half of the third, scoring three runs and knotting the game at 4-4. Jake Labombard singled. Tanner Kozial doubled. Trent Adam walked. A costly Agawam error on a hard hit ball off the bat of Dacota Durkee tied it.
Both Agawam and Westfield went down 1-2-3 in the fourth.
Despite solid pitching from Westfield reliever Aiden King, Agawam manufactured the go-ahead run in the fifth, only to be surpassed by Westfield in the bottom of the inning with a monster ground-rule double from Adam to the left field hill and sharp RBI singles from Matt Bernachez and Zabielski for a 6-5 Westfield lead.
Agawam went quickly in the sixth and Westfield tacked on an “insurance run” on consecutive hits and excellent base running by Labombard and Kozial.
But as they say, “it ain’t over ’til it’s over.”
Agawam scored two runs in the top of the seventh to knot the game at 7-7.
In the bottom of the seventh, Westfield took advantage of a center field error on a towering shot by Matt Bernatchez, a Dacota Durkee walk and a gutsy double-steal to put the winning run 90 feet away with the always dangerous Zabielski at the plate.
A 3-2 fastball was no match for Zabielski as he laced a single to straight away center plating Bernatchez with the walk-off run.
Westfield hits the road for a game in Greenfield Wednesday night at 7.

LATE RESULTS – Mon., July 1
LITTLE LEAGUE SOFTBALL
10-YEAR-OLD ALL-STARS
Westfield 18, Northampton 3
Westfield 10U all-stars opened up the defense of their state title with an 18-3 win over Northampton.
Kaleigh Little and Jaylianie Santiago scored four runs apiece and Julia Bonfitto, Emma Nelson and Sydney LaPanne each scored three. There were a number of extra base hits in the game as Bonfitto had three doubles, Sydney LaPanne had a triple, and Riley Davidson and Emma Nelson had doubles.
Bonfitto pitched four no-hit innings, giving up two walks and striking out 10. Riley Davidson and Isabella Potenza closed out the game.
The 10U All-Stars will next play Agawam on Friday at Sadie Knox.