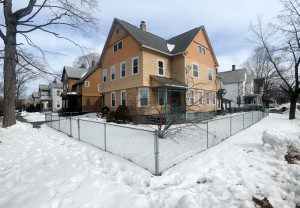 The sidewalk next to a vacant house owned by Bank of America is hidden by a layer of icy snow at the corner of Holland and Woronoco avenues. Sidewalks which are not cleared by the abutting owners are problems both for pedestrians and city officials. (Photo by Carl E. Hartdegen)

WESTFIELD – Winter storms which leave snow behind are perennial problems for New England residents but, when snow is not removed from sidewalks, a transitory issue can become a serious concern.
A city ordinance requires that owners of property which abuts sidewalks in the city remove “snow, sleet or ice” from those sidewalks “within 24 hours” of the end of the snowfall and provides for a $25 fine, per day, for property owners who do not comply with the ordinance.
The city’s community policing officers are the primary enforcers of the ordinance and officers report that the thorniest problems stem from absent owners, especially in cases involving vacant property owned by banks.
Sgt. Eric Hall, the commander of the community policing unit, said “the goal is compliance” so punitive citations are not the first response to sidewalk complaints.
“You hate to write a citation right of the bat” Hall said and explained that the first response is a visit from a community policing officer who informs – or reminds – property owners of their obligations.
Citations usually are not issued, he said, unless warnings fail to elicit action.
“Usually it becomes clear pretty quickly,” Hall said, which addresses are problematic.  He went on to say “I’m not going to go back there every single snowstorm.”
He said “The most stringent thing the department can do is to issue citations every single day. And sometimes we do that.”
A case in point is a Washington Street address owned by a Southwick resident.
Hall said that when Officer Steven Nacewicz spoke with the owner, the man responded by claiming that a lot of city sidewalks have not been cleared. 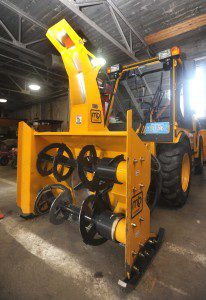 The sidewalk has not been cleared and on Sunday police started to issue daily citations.
“We can continue issuing them citations but if they become unpaid it goes to the city,” Hall said.
Westfield Mayor Daniel M. Knapik said that the Law Department rarely becomes involved.
He said that, once property owners are advised, “The vast majority of them will comply.”
“The big banks are a problem” Knapik recognized, but went on to say “they’ll eventually respond to us.”
He said that his solution to the problem is to have city workers deal with it.
“I’ll dispatch a public works crew to clear it” he said.
He said that sometimes the public seems to think that city authorities have people driving around the city looking for snow-covered sidewalks but that is not the case so it is necessary for people who know of problem sidewalks to report them.
He advised that residents with sidewalk complaint contact the Department of Public Works.
Knapik also said that his administration has dealt with the same sidewalk problem facing Southwick business owners whose property abut sidewalks without tree belts to accommodate plowed snow.
He said that a similar problem exists on newly widened sections of Main Street where there are no longer tree belts so snow plowed from the roadway ends up on the sidewalks.
Knapik said that the city dealt with that problem by purchasing an articulated heavy duty snowblower which clears the sidewalk.
“I recognized a need and we bough the equipment” he said.
“I don’t expect property owners to move that amount of snow” he said.
He also dismissed liability issues arising for municipal actions to remove the snow.
“I’m not going to let the threat of liability keep us from clearing the sidewalks” Knapik said.