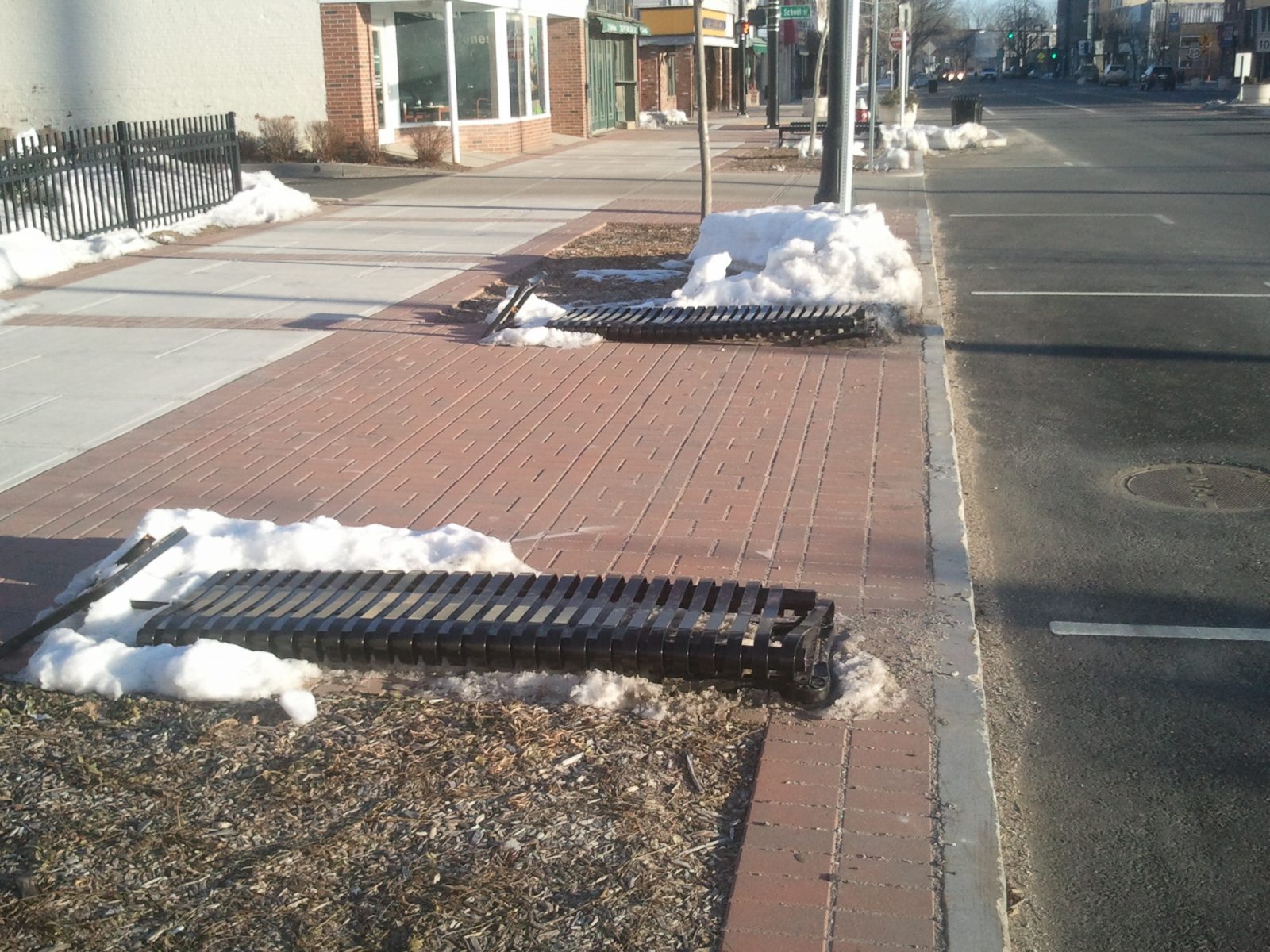 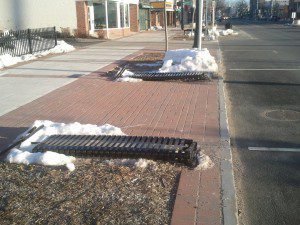 Two of the benches installed near the Westfield Athenaeum were damaged during the snow removal process as a result of the recent blizzard. The city will be replacing them after the winter season is complete. (Photo submitted)

WESTFIELD – Mayor Daniel M. Knapik said the work done after Blizzard Nemo, pushing back snow banks, removing snow downtown and on narrow streets has put the city in a position to deal with the storm expected to begin as rain Saturday and end as heavy wet snow late Sunday morning.
“I talked with Jim (Mulvenna, Public Works Superintendent, earlier Friday) and he said he’s ready,” Knapik said. “Most of the snow has been removed from downtown and Public Works has been aggressive in pushing back snow banks and snow at intersections. We took advantage of the warmer weather to do that work, which is good because the banks that are left are frozen solid.”
Knapik said this storm is not expected to be accompanied by strong winds that pushed snow into drifts seven and eight feet high in some areas of the city.
“There are a couple of differences, on this one there is the timing and the fact that we don’t anticipate whiteout conditions that happened during Nemo when visibility was so bad we have to pull the plowing crews off the roads for their own safety,” Knapik said. “During Nemo there was a period from midnight to 4 a.m., when we were getting three inches of snow and hour and that combined with the wind meant we had to get the trucks off the road because the drivers couldn’t see.”
The projected snowfall this weekend is between five and eight inches, but the storm will bring a wintery mix of rain, sleet as well as snow to the region. Nemo dropped 23 inches of snow in a 24 hour period according to the National Weather Service.
Mulvenna said Nemo cost the city more than $200,000 to clear snow after the storm ended on Saturday, Feb. 9, pushing snow removal for this year over the $400,000 budget. Snow removal is one of the few accounts communities are allowed by the state to deficit spend because of traffic safety and economic issues.
“I’m way over that ($400,000.) Nemo was over $200,000. I pay for clearing the municipal off-street lots, which was $32,000 from Nemo, and the school lots,” Mulvenna said. “We also had to buy salt, which cost $100,000, and sand at $10,000.”
“This storm doesn’t sound like a big deal,” he said.  “Nothing out of the ordinary.  But it will be a long duration storm on a weekend. When storms take a long time to get over, it gets expensive.”
Mulvenna said that crew will begin to pre-treat roadways and hills with sand and salt.
“We always do that, then when it gets to be two or three inches, we start our plowing operations and call the private guys in,” Mulvenna said. “We’re pretty much caught up from the last storm. We had crews out today digging out fire hydrants. So we’re all set for this one.”
Meanwhile, a Massachusetts state lawmaker has come up with a way to help cities and towns boost their strained snow removal budgets.
Worcester Democrat John Bineinda has introduced legislation that would establish a $2 scratch-off lottery ticket, the proceeds of which would go to a statewide snow removal fund.
He suggests calling the ticket the “snow bank” lottery.
Cities and towns running snow removal deficits could request funds from the account, subject to review by the state comptroller.
Bineinda says the fund could help smaller towns that often have to cut into other areas of their budget during harsh winters when they blow through their snow removal budget.