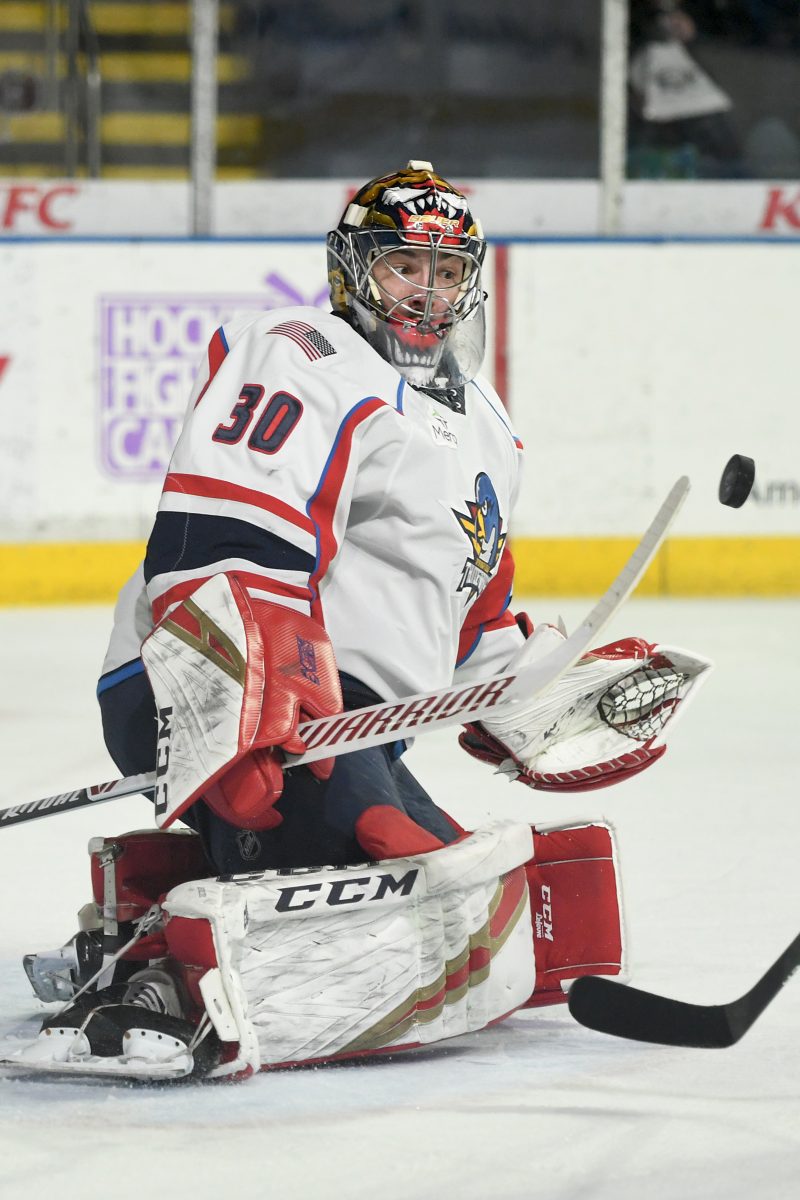 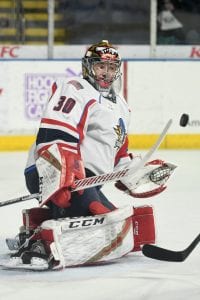 Philippe Desrosiers makes the save for Springfield. (Photo by George Skovera)

SPRINGFIELD – Philippe Desrosiers made team history on Wednesday night as the Springfield Thunderbirds (14-11-0-0) came away with a 3-1 victory over the Lehigh Valley Phantoms (10-8-1-4) at the MassMutual Center.
The visitors from Pennsylvania dictated the terms of the opening period, unleashing a 19-shot barrage at Desrosiers in the first 20 minutes of the contest.
Lehigh Valley’s only dent in Desrosiers’ armor, however, came on the game’s first special teams situation, when Connor Bunnaman snapped a forehand shot over Desrosiers’ glove on a face-off with his team shorthanded at 9:29. Bunnaman’s first AHL goal of this season would be the only marker in the opening frame.
Alex Lyon had a much easier opening period in the Lehigh Valley goal crease, stopping just five shots in the first period.
Despite the shot disparity, the Thunderbirds, behind Desrosiers’ 20 second-period stops, got the game back even at 4-on-4 when Dryden Hunt unleashed a low wrist shot through the glove side of Lyon, tying the game at 6:25 of the second period. It was Hunt’s first AHL goal of this season after he went six games without a tally.
With the T-Birds outshot 39-13 after two periods, the Phantoms did not let off the throttle in the third period. Incredibly, Springfield would have to go to the penalty kill six times in the final period alone, and Desrosiers made another 24 stops to finish the night with a Thunderbirds team record with 62 stops.
14 of those saves came against former Springfield Falcon Greg Carey, who had scored 16 times in his career against Springfield in 19 prior games.
The T-Birds still had work to do to make their goaltender’s historic night a victory, and Brady Keeper provided the finishing touch with a power play slapper that rang off the pipe and past Lyon at 14:47 of the final period. Four times in the final eight minutes, the penalty kill was summoned, and each time Desrosiers and the defense passed the test.
Desrosiers’ performance not only set the new T-Birds record, but it shattered the previous mark set by Chris Driedger, who stopped 49 shots in a 2-1 overtime win against Rochester on Oct. 27.
The T-Birds, winners of two straight to begin a six-game homestand, welcome the Hartford Wolf Pack for the first time this season on Friday night at 7:05 p.m.
For more ticket information or to become a 2019-20 Springfield Thunderbirds ticket package member, or to purchase single game tickets, call (413) 739-GOAL (4625) or visit www.SpringfieldThunderbirds.com. – Courtesy of Springfield Thunderbirds