LAKE PLACID, N.Y. – The Westfield Youth Hockey Junior Bombers took to the ice this past weekend in the historic Olympic town of Lake Placid, NY., but it was the crew from the Whip City that left its imprint on the region.
The WYHA Junior Bombers Squirt One’s participated in five CAN/AM tournament games at the Olympic Rinks. They had a marvelous weekend, sweeping their respective bracket with four wins to finish first for the championship round, which was held early Sunday morning. 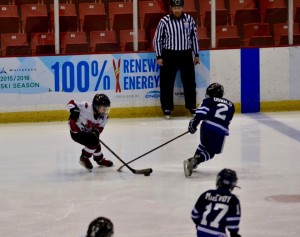 Blake Cavallon dekes out his opponent.

In the championship game, the Junior Bombers faced the Montclair Blues from Little Falls, NJ. Their game took place on the storied ice, where in 1980 the USA defeated the Soviets in what became known as “The Miracle on Ice”.
The Blues were eager to show their worth after the Junior bombers defeated them earlier in the season, 7-2. While the Blues gave the Bombers their best game of the weekend it wasn’t enough to displace the Bombers from a championship victory. With a final score of 3-1, the Westfield Junior Bombers won gold. In addition to going undefeated all weekend, the Bombers walked away with another win in the skills competition that took place on Saturday. Francis Powers, Gwen Hosmer, Evan Grant, and Joey Roselli powered the Bombers to went unbeaten run.