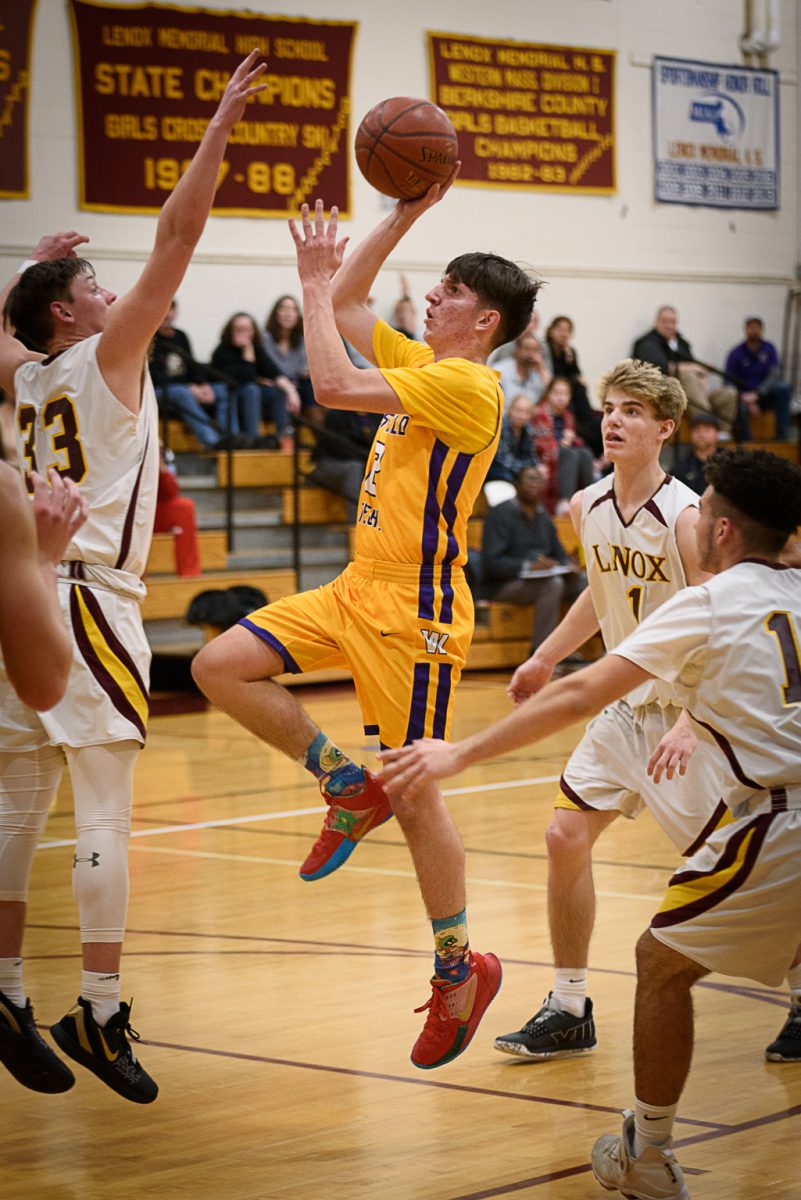 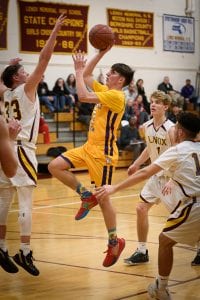 LENOX – Cha-ching! That’s the sound of the Lenox Millionaires cashing in on an opening round postseason victory.
The fifth-seeded Lenox Millionaires chased the No. 12 Westfield Technical Academy Tigers in a West Division 4 opening round tournament game, 71-39, Tuesday night.
Lenox’s Nick Nictora led all scorers with 17 points. Austin Paradise (13 points) and Andre Collins (11) also reached double-digits scoring for the Millionaires (13-8). Luke Patella and Michael Ward finished with nine and eight points, respectively.
Westfield Tech’s Carter Slack scored a team-high 10 points, also a season high for Slack. David Tikhonchuk chipped in eight for the Tigers.
Lenox opened the game with a 9-0 run, spreading the ball around and getting four players on the board from the get-go. Westfield Tech kept within striking distance for more than a quarter until the Millionaires went on a 12-2 run midway through the second quarter.
Paradise hit consecutive 2-point baskets, and Patella drained a 3-pointer with 3:53 remaining in the half to give Lenox a commanding 27-14 lead. The Millionaires went ahead 33-16 after another bucket from Paradise and four made free throws.
Lenox dominated the low post with precision passes, blazing speed, and backdoor plays. The Millionaires continued to drive the lane hard in the second half, drawing five trips to the free throw line in the opening minutes of the third quarter. They went 5-of-10 from the charity stripe during that stretch to take a convincing 44-27 advantage.
“They broke down our press easily and converted with layups as we didn’t defend the paint well,” Westfield Technical Academy High School boys basketball coach Kyle Dulude said.
A late third quarter 3-point shot from Paradise and an and-one from Nictora put Lenox firmly in charge, 59-29. The Millionaires opened the fourth quarter with a 10-2 run to end it.
Westfield Technical Academy, which reeled off five straight wins to earn a tournament berth, finishes the season 9-10 overall.
“Our kids have nothing to hang their heads about,” coach Dulude said. “They didn’t quit this season and did show a lot of life. Today was just not our day.”
Westfield Tech played without the services of Darryl Reopel who suffered a non basketball-related injury. Tikhonchuk also reinjured his shoulder diving for a loose ball.
“We don’t regret playing the game and I feel the experience was great for our underclassmen,” said coach Dulude, also noting the valuable tournament experience for other players such as sophomores Josh Sturmer and Andrew Navarro. “Hopefully (that) will help them grow and develop.”