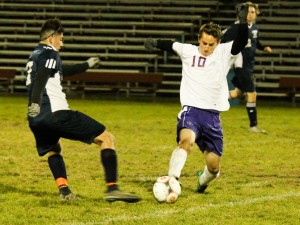 Phillip Lisyanyy (10) battles it out for a WTA possession Tuesday against Keene Tech in a state small vocational schools tournament game at Bullens Field. (Photo by Kellie Adam )

WESTFIELD – The Westfield Technical Academy High School boys’ soccer team has made its mark qualifying for and winning the state’s small vocational schools tournament over the course of the last few years.
Unfortunately for the Tigers, it was not to be this season.
Eric Mijangos had a hand in two scoring plays, scoring once and assisting on another goal as the Keefe Tech Broncos bucked the Westfield Tech Tigers 2-0 Tuesday night at Jachym Field.
The game easily could have swung the other way.
After playing through nearly a relatively quiet first half, Westfield Tech’s Yeremy Kovylyak stole the ball in the waning minutes on a Keefe misplay just inside the penalty box and drilled a shot at the net. The shot went wide left.
Westfield Tech had another golden opportunity go by the wayside early in the second half on a beautiful cross pass from Kirill Ohkrimenkio. The Tigers just could not connect.
Keefe Tech struggled to score early as well, with Westfield Tech’s defense collapsing in time to turn away several drives.
Keefe Tech had the game’s first shot on goal in the eighth minute. The Broncos did not manage to squeeze off another shot until only about six minutes remained in the half.
The second half was a different story.
Keefe’s Angel Brizuela scored the game’s first goal in the 53rd minute. Eric Mijangos set up the score, squeezing the ball between three defenders with some nifty footwork on the dribble. Mijangos passed it out front to a wide-open Brizuela, who only needed to tap it in.
Mijangos tacked on an insurance goal nearly 10 minutes later. Jimmy Medrano assisted.
Mijangos also made a nice defensive play in the closing minutes, making a sliding defensive stop out in front of the net and later heading the ball out-of-the-bounds.

D2 Golf State Championships Update
RAMS’ SWAN SONG: Southwick finished just outside the top 10, compiling an 11th place score of 341 at Black Swan Country Club in Georgetown Monday. James Longhi led the Rams with an 81. Bradley Durand shot an 82. Chris Molta and Jagger Turgeon each finished with a round of 89.
Southwick completed a fantastic season on the local golf courses. The Rams went 16-2 overall during the regular season, and unbeaten (12-0) in the Bi-County West to extend its league win streak to 29 straight victories. They came within six points of winning the West Division 2 golf championship at Crestview Country Club in Agawam, losing only to Belchertown.
Southwick will look to make another run at the title next season as head coach Al Selden seeks his 100th coaching victory.