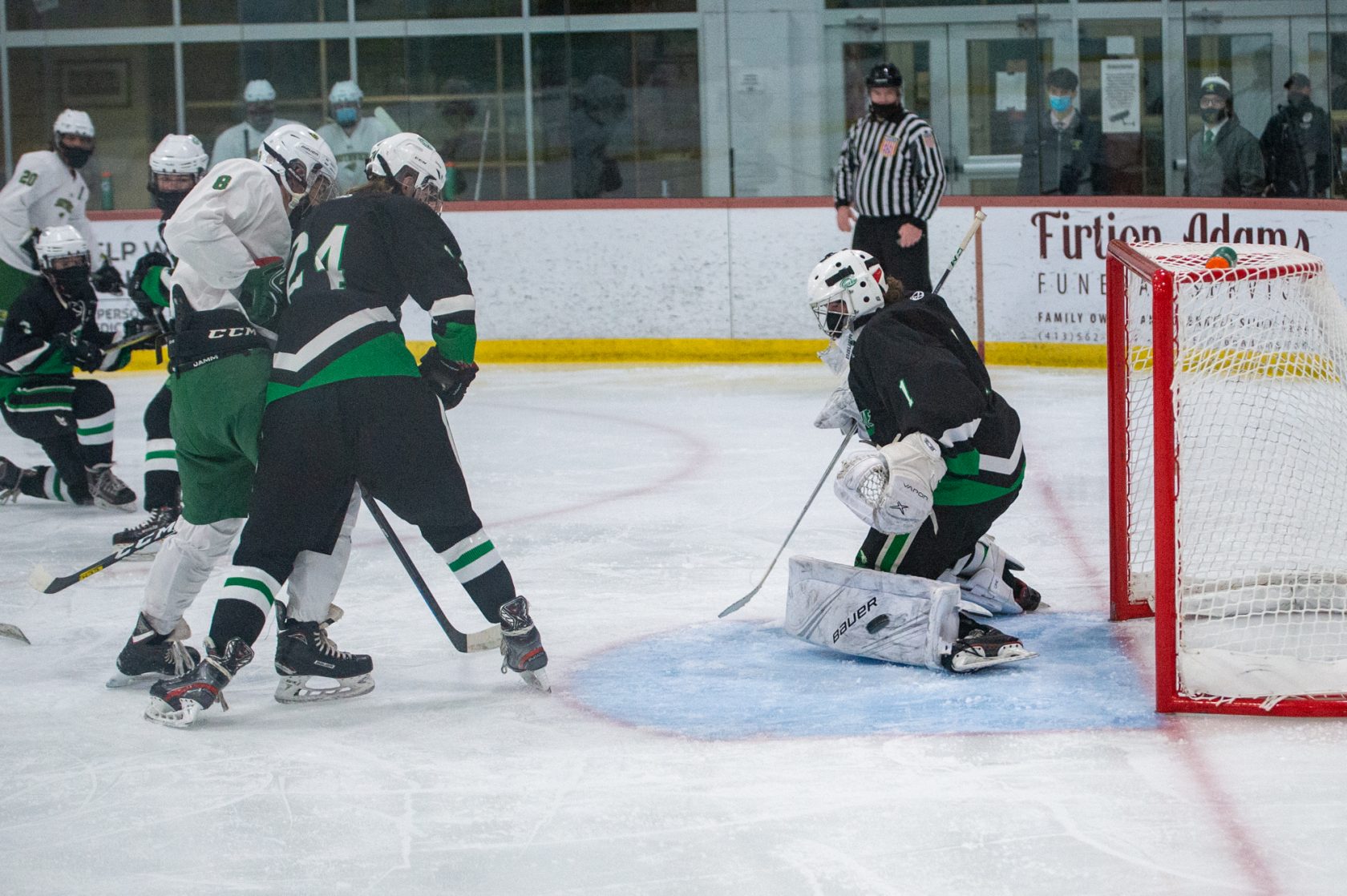 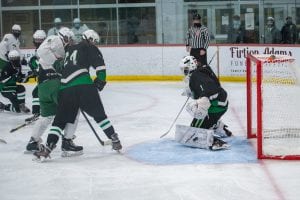 Jamming with a Greenfield defender, Southwick’s Paul Whalley (8) gets the puck past the Green Wave goalie for the Rams second goal. (BILL DEREN PHOTO)

WESTFIELD – It is not often that when a sports team opens up its season the finish line is already in sight but that is the case for the Southwick boys ice hockey team.
Southwick played the first of eight games that will take place over a span of 18 days, falling to Greenfield 9-2 Wednesday night at Amelia Park Arena.
The start of the winter sports season at Southwick Regional High School was delayed due to school policy surrounding coronavirus protocols, which prevent sporting events from taking place if students are not in school or enrolled in some type of hybrid schooling.
Despite having practiced just a few times, Southwick delivered an evenly-matched effort against Greenfield and even led early on. Evan Iglesias skated around the back side of the net and somehow found a way to slip the puck past three defenders and the goalie for a shorthanded goal 2:12 into the first period. Tommy Whalley assisted.
Southwick kept Greenfield scoreless for nearly 11 minutes to start the game. The Green Wave knotted the game at 1-1 with a goal with 4:05 remaining in the first period.
Greenfield briefly went ahead 3:59 into the second period on a score from Shane Prusak. Southwick scored the game’s first goal shorthanded, so it should not have come as any surprise that the Rams would took advantage of a power play goal. Paul Whalley scored the equalizer with 9:10 left in the period. Teagan Stannard and Johnny Blase assisted.
Less than three minutes later, Greenfield went ahead when Devin Niles hammered a power play goal for a 3-2 lead. The Green Wave surge continued as they scored a total of seven unanswered goals to end the game.
Niles scored a shorthanded goal with 4:33 remaining in the middle frame. A little more than two minutes later, Greenfield’s Jacob Bryant netted a score for a 5-2 advantage.
Southwick successfully fought off 5-on-4 and 5-on-3 power plays for Greenfield in the early minutes of the third period. But the relentless offensive pressure from the Green Wave over the final 7:42 resulted in four more goals. Prusak recorded a hat trick with two more goals. Sam Knight and Trevor Kuchieski each scored once.
“Early on I thought we got after the pucks a little bit better, but obviously our wind isn’t there,” Southwick boys ice hockey first-year head coach Gary Whittier said. “We just couldn’t hang with them. “
Whittier, a Holy Name youth hockey coach and former Cathedral boys ice hockey player, plans to institute his brand of hockey in Southwick over the course of the next few weeks – – and hopefully longer.
“They’re new to me; I’m new to them,” coach Whittier said. “It’s getting my systems in play. We’re probably going to take some lumps early on but the goal is to continually improve each game and win some games.”
Once the winter season has been completed, Southwick boys ice hockey plans to play in “Fall II,” beginning March 1. If area hockey teams do not opt to play during the “Fall II” season, will use the ice time to practice or attempt to schedule junior league competition, according to Whittier.