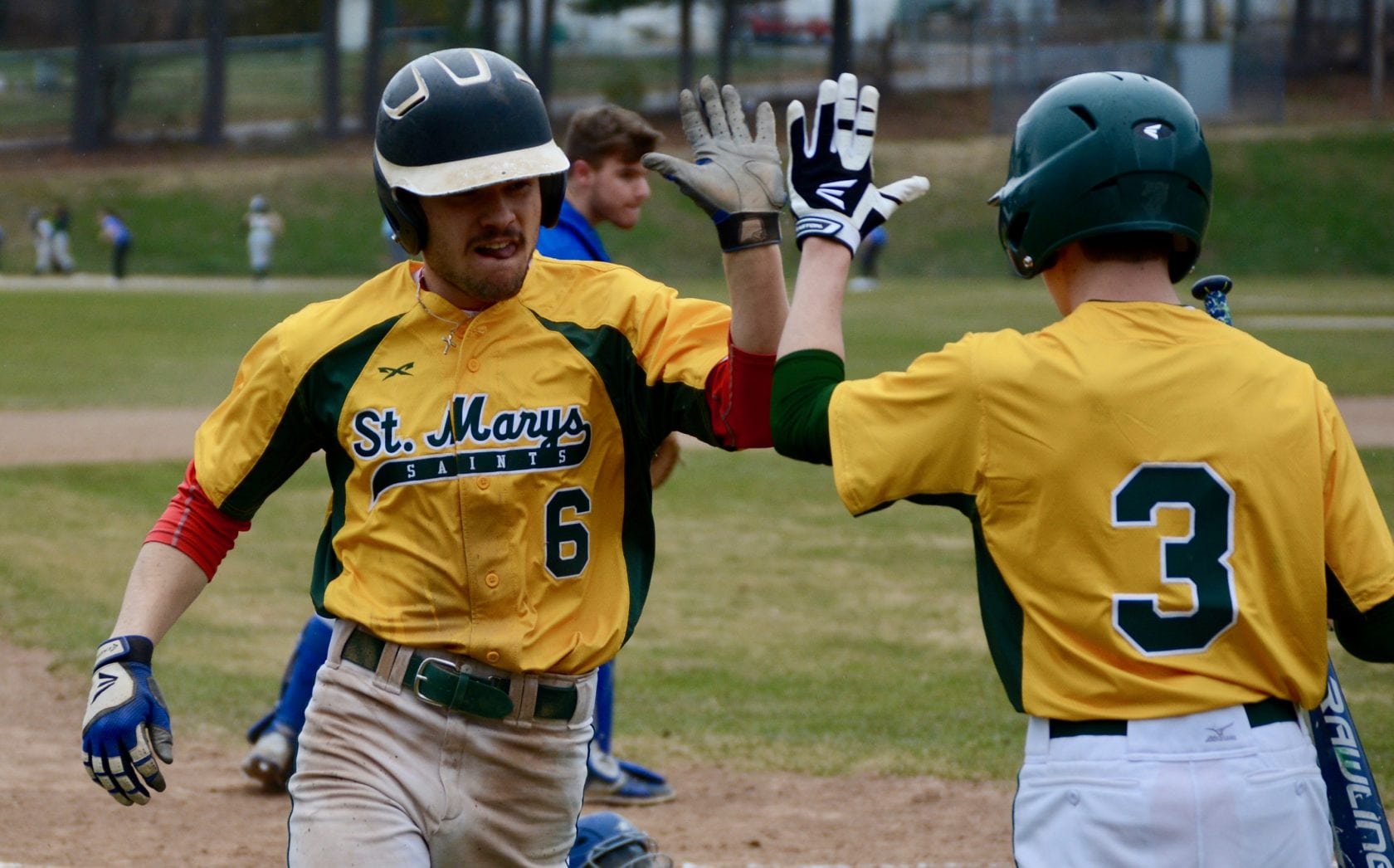 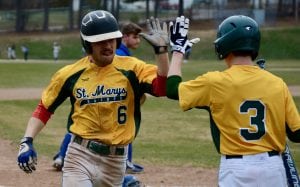 St. Mary’s Quinn Powers (6) and (3) Jack Lamirande high five after Powers scored on a sac-fly by Kevin Rockwal in the top of the second inning. Powers drew a walk to lead off the inning, and stole second and third base before scoring. (Photo by Chris Putz)

PALMER – While some things change, others remain the same.
That remains the case when it comes to the St. Mary High School baseball team.
The defending Division 3 baseball state champion St. Mary Saints picked right up where they left off last season by defeating the Palmer Panthers 10-7 in a season opener Thursday at Legion Field.
St. Mary’s launched their attack early with five runs in the second inning.
Quinn Powers (hit, RBI) got St. Mary’s off and running, drawing a lead-off walk to in the second. Powers stole second and third base, and scored on Kevin Rockwal’s sacrifice fly to center field.
Jack Masciadrelli smacked a bases-loaded two-run single to make it 3-1. A two-run double from Jake Butler (4 hits, 3 RBIs) gave St. Mary a 5-1 advantage that proved to be a big enough cushion.
St. Mary’s Aidan Burke finished with three hits and an RBI. Saints’ Matt Masciadrelli walked three times and scored two runs and Rockwal collected two hits.
Rockwal started the game on the mound and was helped out by relievers, Powers and Matt Masciadrelli.

Rams finish week 2-1
Palmer 7, Southwick 5
Southwick (2-1) lost its first game of the season, following two straight wins to open 2018.
Nikki Willey struck out eight batters and homered for Soutwhick. Rams’ Molly Petit went 2-for-3.
On Wednesday, Tori DellaGuistina went 2-for-3 with a home run and three RBIs. Willey also batted in three runs with a 4-for-5 outing at the plate.
In their 9-3 season opening extra-innings win against Easthampton on Monday, Southwick rallied from a 3-2 deficit in the seventh inning. The Rams forced extra innings when Grace Ingledue hit a base knock in the seventh. The runner advanced on Sydney Gorman’s sac bunt, and eventually came around to score.
In the eighth, Southwick exploded for six runs, and the rest was history.
“We definitely have a new identity this year,” said Southwick softball coach Joe Hough, whose team is playing without their ace pitcher Emily Lachtara for the first time in five years.
“Emily left the program (upon graduation in 2017),” Hough said. “She accounted for a lot of strikeouts every game. We’re improving our hitting and defense. There’s more team involvement now so we have to find ways to push runs across.”