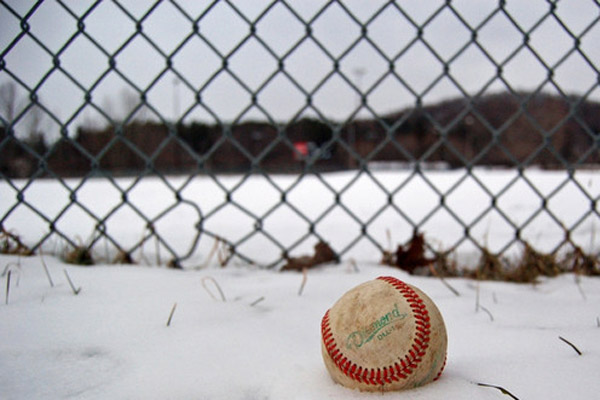 WESTFIELD – No, it is not an April Fool’s joke.
Much of the Whip City and nearby towns were treated to mid-spring temperatures during a brief period in March. Not so on Opening Day.
A blast of winter weather forced the cancellation of most area schools Monday, and left local diamonds and playing fields in poor conditions rendering them unplayable.
Several games were postponed Monday, and others on Tuesday’s slate have already been moved as well with poor field conditions likely to linger. For the latest updates, continue to check our Facebook page and thewestfieldnews.com.
Not every team has had its seasons delayed.
On Thursday, the Westfield High School boys’ lacrosse team kicked off its 2016 regular season with a resounding 14-4 win over West Springfield at Clark Field. Senior Matt Chlastawa lit the fuse for the Bombers’ attack with five goals and three assists.
Westfield’s Mason Balch provided three goals and two assists, Zach Gentle recorded one goal and four assists, and Matt Bonsall scored twice. Max Maggipinto (1 goal, 1 assist), Anthony Sullivan (1 goal, 1 assist), Alex Neuser (1 goal), and Mike Visconti (1 assist) also contributed on offense.
Matt Reynolds (7 saves) and Alex Beauchemin (6 saves) split time in net for Westfield (1-0).
The Bombers’ road contest against Shrewsbury was rained out Saturday.
“We were all disappointed because we were looking forward to playing Shrewsbury to see where we are at,” said longtime Westfield High School boys’ lacrosse head coach Mark Cavallon, “but we would much rather play them in the future on a day when it’s 80 degrees versus playing in a puddle.”
With Westfield’s game against Agawam also having been postponed Tuesday, the Bombers are not scheduled to take the field again until Friday against the visiting Northampton Blue Devils. That contest is slated to begin at 5:30 p.m.