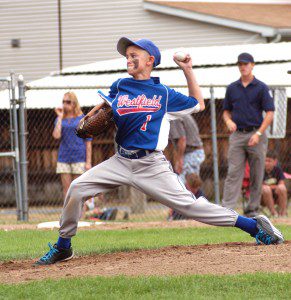 The Westfield South Little League 12-Year-Old All-Stars are championship bound.
Westfield South improved to 3-0 in sectional tournament play with a wild and crazy 11-9 win over West Boylston last night at Cross Street Field.
Westfield South rallied from a 7-2 deficit with a nine-run, fourth-inning explosion.
In the bottom of the fourth, Andrew Tobias (2-3, 3 RBIs, walk) had a two-run double, and Cody Garwacki (2-2, 3 RBIs, walk) and Kyle Roberts (3-3, 3 RBIs) each had two-run singles to highlight the offensive fireworks for Westfield.
West Boylston made things a bit interesting in the last inning.
In the top of the sixth, Kyle Kapopoulos rapped a two-run homer to close the gap to two runs, 11-9. It was the third home run of the game for West Boylston. Sam Welsh had two homers for the opposition.
WB even managed to get the tying runs into scoring position with the winning run at the plate, but Westfield South reliever Tyler Delgado struck out the last two batters to preserve the victory.
The South advances to play Pittsfield South in the Section 1 title game today at Cross Street Field at 2 p.m.

NORTH 11S STAYIN’ ALIVE: The Westfield North Little League 11-Year-Old All-Stars are making a habit of staying alive. The North staved off elimination in a big, big way, blasting Pittsfield South 16-6 last night at Paper Mill Field.
Westfield North’s Elliot Avery bashed a grand slam, Cade Bradley hit a three-run blast, and Spencer Cloutier drilled a two-run shot. Mike Nihill collected three hits. Jack Masciadrelli had an RBI double that broke open the game in the second inning.
Cloutier was solid on the mound for Westfield. He scattered six hit, struck out five batters, and walked two.
“This was a shocker to say the least,” Westfield manager Mike Nihill said. “The boys had a great, great practice. One through nine, our hitting was solid tonight.”
For Westfield North, it was another win over what Nihill called “a gorilla,” comparing Pittsfield South to previously unbeaten Northampton, a team they knocked off a week ago to advance in the districts.
“I liken it to a magic carpet ride,” manager Nihill said.
The North hopes to fly high when they continue their journey today at Holden at 2 p.m.