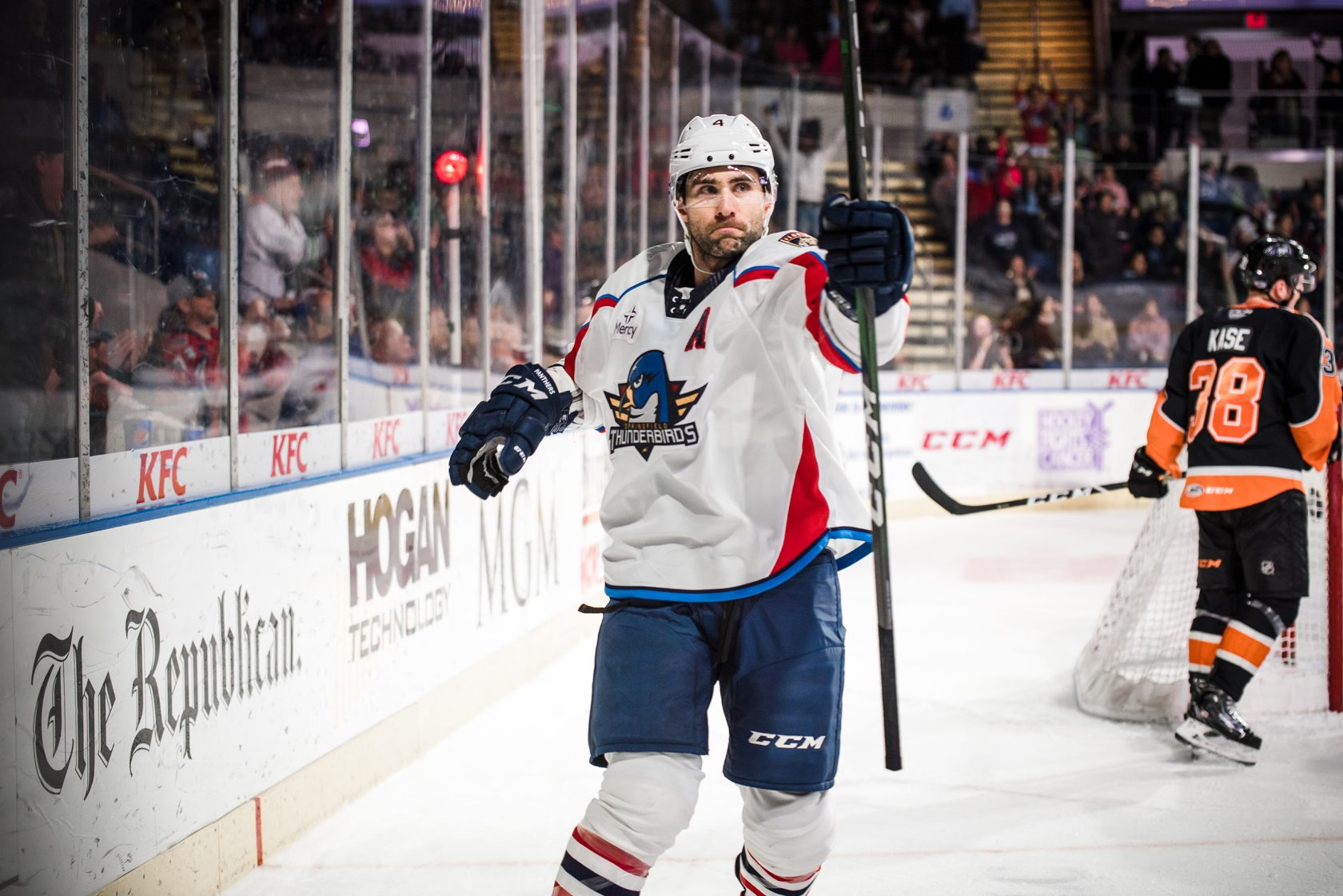 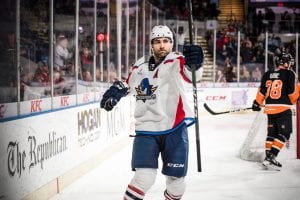 SPRINGFIELD – The Springfield Thunderbirds (10-6-0-0) put forth another phenomenal defensive effort to come away with a franchise record-tying fifth straight home win, 2-1, over the Lehigh Valley Phantoms (6-3-1-4) on Wednesday morning at the MassMutual Center.
Both teams had plenty of jump to their step in the opening period, as the clubs combined for 25 shots on net. The only one that hit paydirt, however, was not meant to be a pass at all. Aleksi Heponiemi saucered a pass to Owen Tippett on the right wing. As Tippett got to the faceoff circle, he attempted a cross-ice pass in the direction of Aleksi Saarela. However, the puck had its own path in mind, deflecting off the stick of a Phantom defender and over the glove of goaltender Alex Lyon at 12:57.
Tippett pulled himself into a tie with Anthony Greco for team leadership with his seventh goal of the season and first in the last four games to make it a 1-0 game.
At his end of the ice, Chris Driedger continued his busy, productive season with 14 saves to keep the Phantoms off the board in the first frame.
The Phantoms came out with a burst to start the second period, firing the first 11 shots of the period, including a game-tying goal from former Springfield Falcon Greg Carey at the 1:29 mark to tie the game, 1-1.
Driedger would not allow the Phantoms to get a second goal, though, and the T-Birds responded with 14 of the final 16 shots of the middle period. Despite coming away empty on two power plays, Springfield’s 5-on-5 play strengthened and eventually gave them the advantage into the third. After Dominic Toninato powered his way through traffic on the left-side wall, we laid the puck to Thomas Schemitsch out at the blue line. Schemitsch then spotted a cutting Tommy Cross, who accepted the pass in the right circle, pulled Lyon off his angle, and snapped the shot into the top shelf to make it 2-1 with just 3.6 seconds left in the second.
Cross’s second goal of the season also went down as his second goal against the Phantoms in the season series to restore Springfield’s lead.
Driedger would be far from finished, as the Thunderbirds defense helped Driedger keep the Phantoms stuck on just the lone goal from Carey. The Phantoms’ best chance to tie it came with less than 3:30 to go, when the puck bounced off Driedger and dangerous close to the goal line. On a play that was initially ruled a goal, Schemitsch reached out with his outstretched right hand to smack the puck out of the air and away from the goal mouth to preserve the Springfield lead.
The Phantoms would not get any closer, as they fell for just the third time in regulation this season. Springfield picked up its fifth straight home win, second straight victory overall, and improved to 2-0-0-0 against Lehigh Valley this season.
Springfield hits the road for the remainder of the week as a pair of road matchups loom in Wilkes-Barre against the Penguins on Friday and in Binghamton against the Devils on Saturday. Both games drop the puck at 7:05 p.m.
For more ticket information or to become a 2019-20 Springfield Thunderbirds ticket package member, or to purchase single game tickets, call (413) 739-GOAL (4625) or visit www.SpringfieldThunderbirds.com. – Courtesy of Springfield Thunderbirds