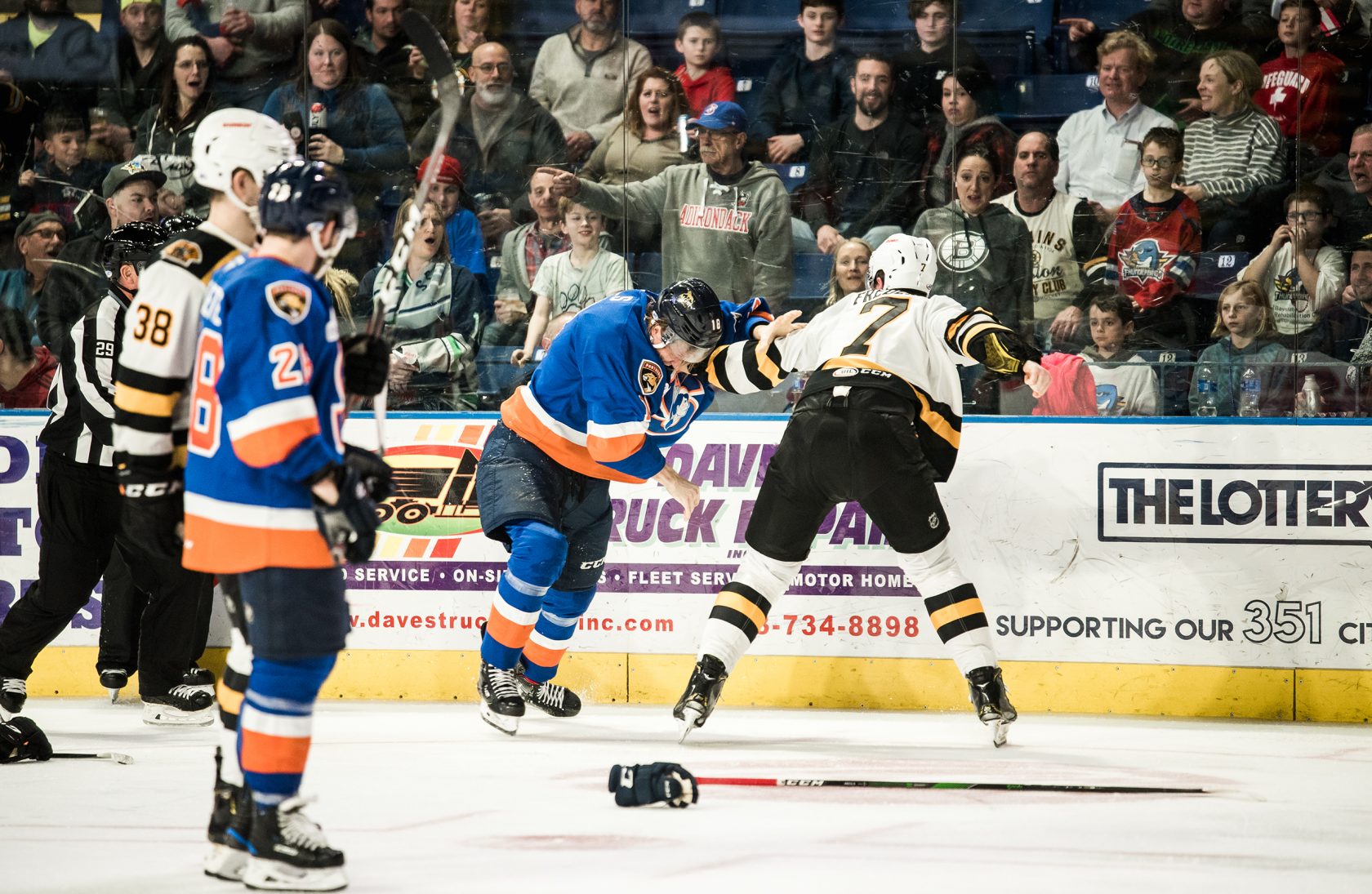 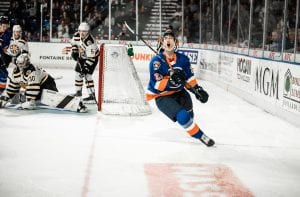 SPRINGFIELD, Mass. – The Springfield Thunderbirds (21-17-2-0) were denied a sixth consecutive victory at the hands of the Providence Bruins (21-15-1-2) in a fierce and fiery 5-2 game on Jan. 11 before a sold out MassMutual Center crowd of 6,793.
A stroke of bad luck would quiet the sellout fans in a hurry on the Bruins’ first power play chance of the night. At the 3:13 mark of the opening period, Peter Cehlarik through a puck around the boards, thinking it would go around to the right-wing side. Philippe Desrosiers made a break for behind his net to play the puck. However, to his dismay, the biscuit kicked off boards in a funny fashion, careening the puck into the slot area, where Trent Frederic pounced to put it into the open net and give the Bruins the 1-0 advantage.
Springfield’s man advantage would get its own chance to tie the game shortly thereafter after the Bruins were caught with too many men on the ice, but the sturdy Providence penalty kill did the job. In net, Dan Vladar continued his solid season against Springfield, stopping seven first period shots, including a left toe save when Jonathan Ang tried to deke him out to the near post on a point-blank chance.
Late in the period, the Bruins got a firmer hold on the lead as Cooper Zech skated on his backhand to the right circle before saucering a pass through the crease to Brendan Gaunce, who beat Desrosiers at 19:33 to make the score 2-0 heading into the intermission.
The two teams failed to score until nearly the midpoint of regulation in period two, but the Bruins added to their lead as Ryan Fitzgerald capitalized on a 2-on-1 rush, beating Desrosiers on a rebound right outside the crease to make it 3-0 at 9:53.
The 3-0 score carried into the third period, where on its fourth try, the T-Birds power play finally broke through as Aleksi Saarela ripped a wrist shot over Vladar’s glove hand at 7:58 to make it 3-1. 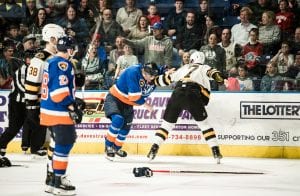 Providence had to kill another penalty shortly after, but the T-Birds could not ever get the Bruins’ lead lower than two. The Bruins, in turn, got a tally from Anton Blidh, who crashed into Desrosiers but scooped a puck in the paint into the net at 12:28.
From there, the game escalated in intensity, with the two teams combining for an incredible 138 penalty minutes, of which more than 100 came in the third period alone.
Springfield’s power play wouldn’t close the door on the game amid the chaos, though, as Ryan Haggerty snapped a wrist shot into the top shelf on the blocker side to make it 4-2.
From there, the Thunderbirds ran out of time, and Karson Kuhlman rounded out the night’s scoring at 18:36 with an empty-netter for his first of the AHL season.
The Springfield loss ended their five-game winning streak, snapped the Bruins’ four-game losing streak, and extended the Bruins’ win streak against Springfield to four.
The T-Birds were in the midst of a three-game road trip last week and will return to their home ice Wednesday against the Hershey Bears. The puck drops at the MassMutual Center Wed., Jan. 22 at 7:05 p.m.
For more ticket information or to become a 2019-20 Springfield Thunderbirds ticket package member, or to purchase single game tickets, call (413) 739-GOAL (4625) or visit www.SpringfieldThunderbirds.com. – Courtesy of Springfield Thunderbirds