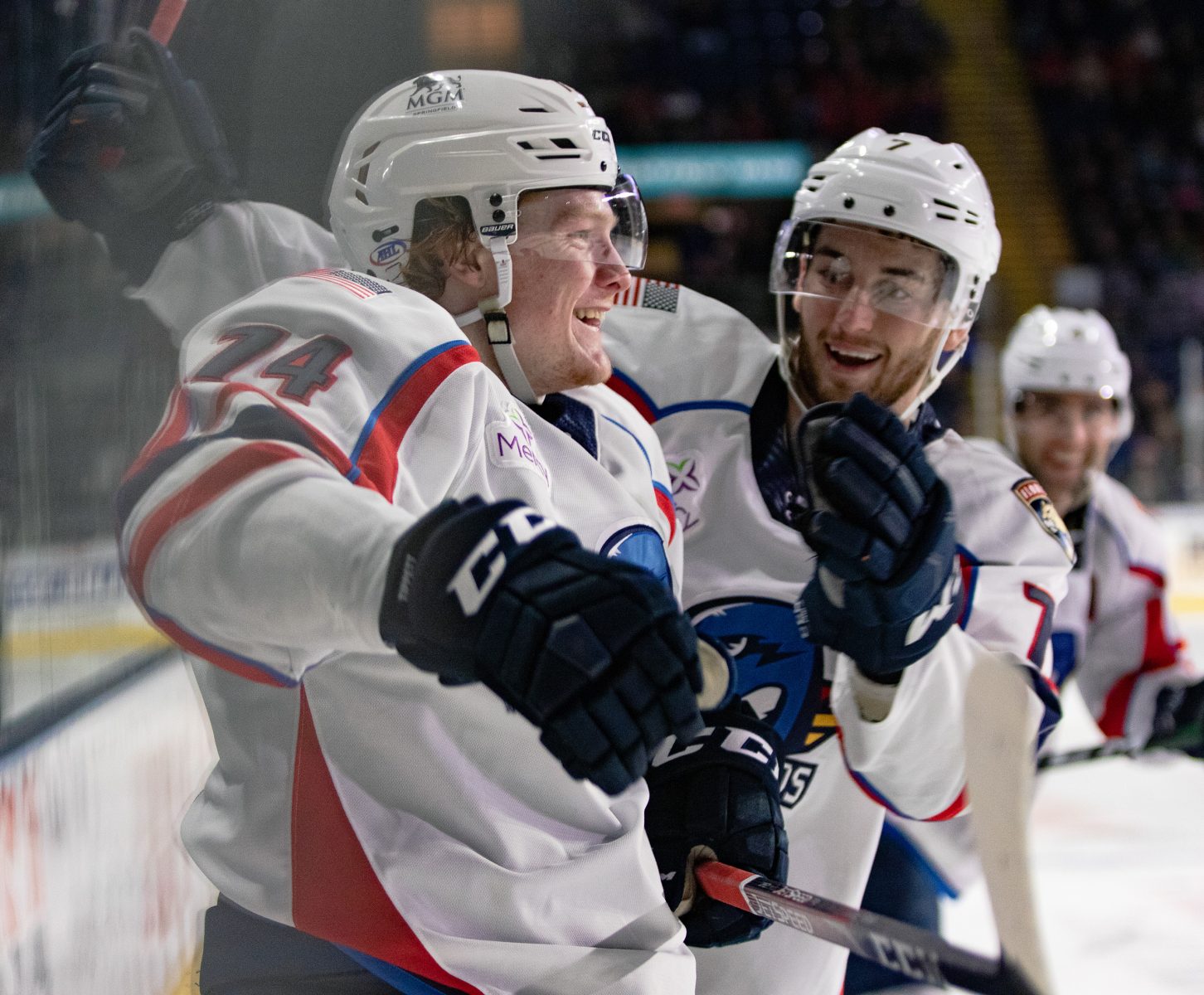 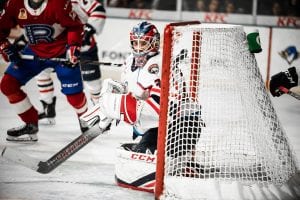 SPRINGFIELD – The Springfield Thunderbirds (13-11-0-0) rediscovered their offensive firepower as they bested the Laval Rocket (12-9-3-0) by a final score of 6-3 on Saturday night inside the MassMutual Center.
For an eighth straight contest, the Thunderbirds saw themselves in a 1-0 hole when the Rocket connected on a power play redirection from Michael McCarron at 9:38 of the period. The 6-6 forward parked himself right in front of Sam Montembeault’s goal crease, and he set himself up perfectly to get a piece of an Otto Leskinen point shot. It was Springfield’s first failed penalty kill in the last 17 chances.
Despite having a slow offensive week, the T-Birds quickly erased their deficit when Henrik Borgstrom hit Riley Stillman with a slick feed into the high slot, and Stillman’s wrist shot skidded off a body and between the legs of Laval rookie netminder Cayden Primeau to tie the score at 12:25, 1-1.
Springfield’s power play then thrust itself into the limelight in the second period when they drew two penalties just 28 seconds apart to open up a 5-on-3 chance in the opening half of the middle frame. From there, Tommy Cross joined the scoring party from the T-Birds blue line when he crept up into the high slot, accepted a feed from Borgstrom, and snapped a wrister to the upper portion of netting behind Primeau.
Montembeault stayed on the top of his game, turning away all 11 Laval shots in the second, and the Thunderbirds power play rewarded him with an insurance goal at 17:53, with former Rocket centerman Daniel Audette parking himself at the crease after a lengthy offensive zone sequence, picking up the loose puck and pounding it to the net to give Springfield the two-goal lead into the second intermission. 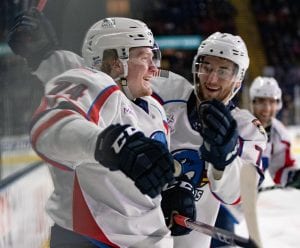 The third period would be far from a smooth finish for the T-Birds, as Laval tied the game on back-to-back goals just 11 seconds apart from Ryan Poehling and Matthew Peca. Peca’s power play goal came on a deflection in the high slot moments after Poehling banked one in off Montembeault from behind the goal line on the left side.
Despite the tie game, the Thunderbirds’ offense did not relent, and on a power play past the five-minute mark, Owen Tippett scored his 10th goal of his rookie season, crashing the right side of the net to locate a rebound and beat a fallen Primeau at 5:38 to make it 4-3.
Stillman added a second goal for his first multi-goal game as a pro at 12:49 from Aleksi Heponiemi and Jonathan Ang. With Laval battling late, Montembeault shut the door to finish his night with 38 saves, and Aleksi Saarela rounded out the scoring with an empty-net finish at 18:25.
Saarela (1g, 2a), Tippett (1g, 2a), Cross (1g, 1a), Borgstrom (2a), Kevin Roy (2a), and Stillman (2g) all had multi-point nights for Springfield in the victory.
The Thunderbirds stay on home ice for the next two full weeks, with a five-gome homestand on the horizon against Lehigh Valley, Hartford, Laval, Binghamton, and Providence.
For more ticket information or to become a 2019-20 Springfield Thunderbirds ticket package member, or to purchase single game tickets, call (413) 739-GOAL (4625) or visit www.SpringfieldThunderbirds.com. – Story and photos courtesy of Springfield Thunderbirds 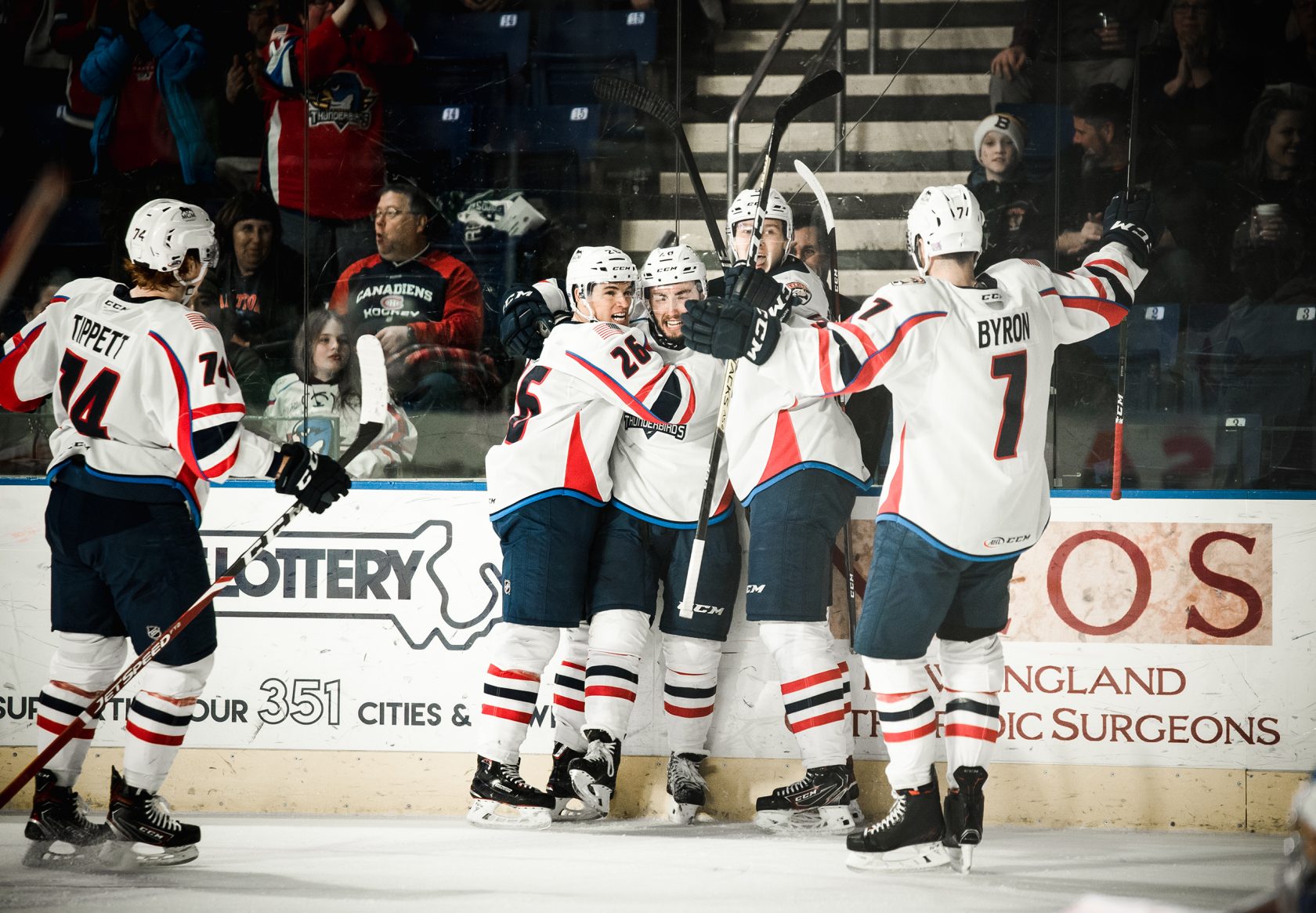