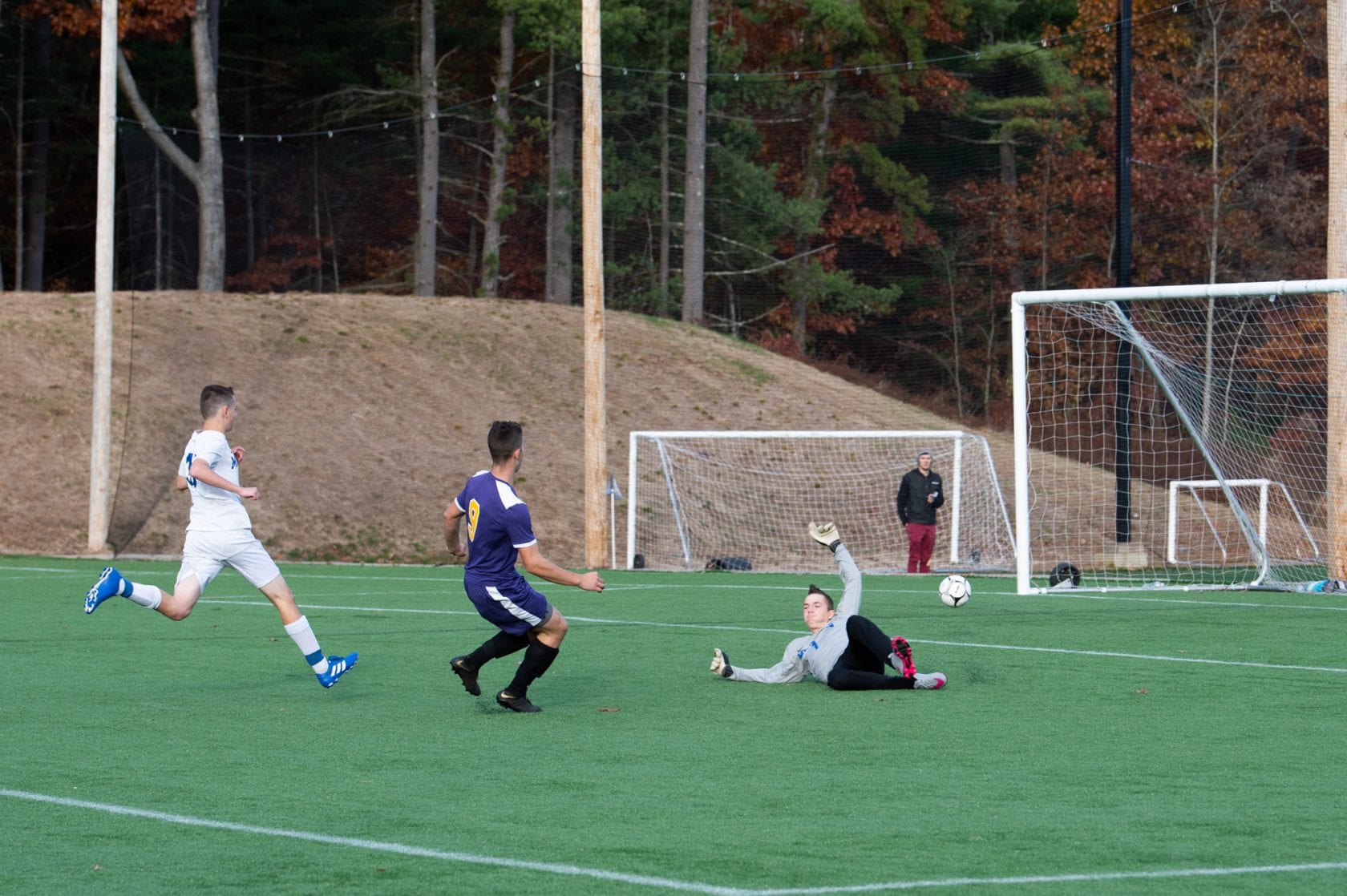 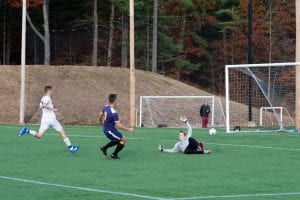 Westfield Technical Academy’s Brad Marion fires the ball past the Monson goalie for the only tally of a West Division 4 boys soccer quarterfinal Wednesday at Roots Field. (Photo by Bill Deren)

WESTFIELD – The Westfield Technical Academy boys soccer team is leaving its Tiger prints all over the West Division 4 map this season.
Westfield Tech (20-1) has been on a blistering pace. The Tigers won all but one regular season contest, captured the MVADA championship, and then Wednesday, followed that up with a dramatic tournament opening victory.
Brad Marion scored the game’s only goal in the 44th minute to lead third-seeded Westfield Tech past No. 6 Monson 1-0 in a West D4 quarterfinal thriller at Roots Field.
Phillip Lisyanny worked the ball up the right sideline to Marion, who outraced a defender to the ball and delivered the game-winning shot past a diving goalie from about 18 yards out.
Monson managed to hang around late as several chances from Westfield Tech just missed finding the back of the net.
“The boys played great,” Westfield Tech coach Kyle Dulude said. “They took the hits like men, got up and got the job done.”
Marion had a second half header sail wide just seconds after his score. He later drilled the crossbar with a bullet. Ed Borodin nearly scored off a rebound of a corner kick.
“I believe our experience and depth gave us the edge today,” coach Dulude said. “We got better as the game went on. We had numerous scoring chances and many, many near misses. Unfortunately for us we get no rest.”
Westfield Tech advances to play second-seeded Pioneer Valley Regional (11-3-3) in the semifinals Thursday at Holyoke High School at 7.
“We need to bring our ‘A’ game,” Dulude said. “With a little bit of luck and a lot of effort, maybe we will see ourselves in a western Mass. final.”
The Westfield Technical Academy boys soccer team was also voted The Westfield News MVP of the Week earlier this week based on last week’s final tally.

CROSS COUNTRY UPDATE: For the first time in school history, the Westfield Tech girls cross country team had a a full team to participate in the state vocational schools’ championships at Wrentham Developmental Center. Ksienza Zinchenko finished first for the Tigers in 29:22. Zinchenko was followed by Ashley Metcalf, Emma Bromley, Nicole Merck and Ava Montavoni. …Ed Towers led the WTA boys in 20:32. Zach Czernak, Matt Thayer, Josh Strommer, Nick Czernak, Dacota Durkee, and Mike Durkee rounded out the finishers for the Tigers, who placed sixth out of 10 teams, their best finish in the program’s four-year history.