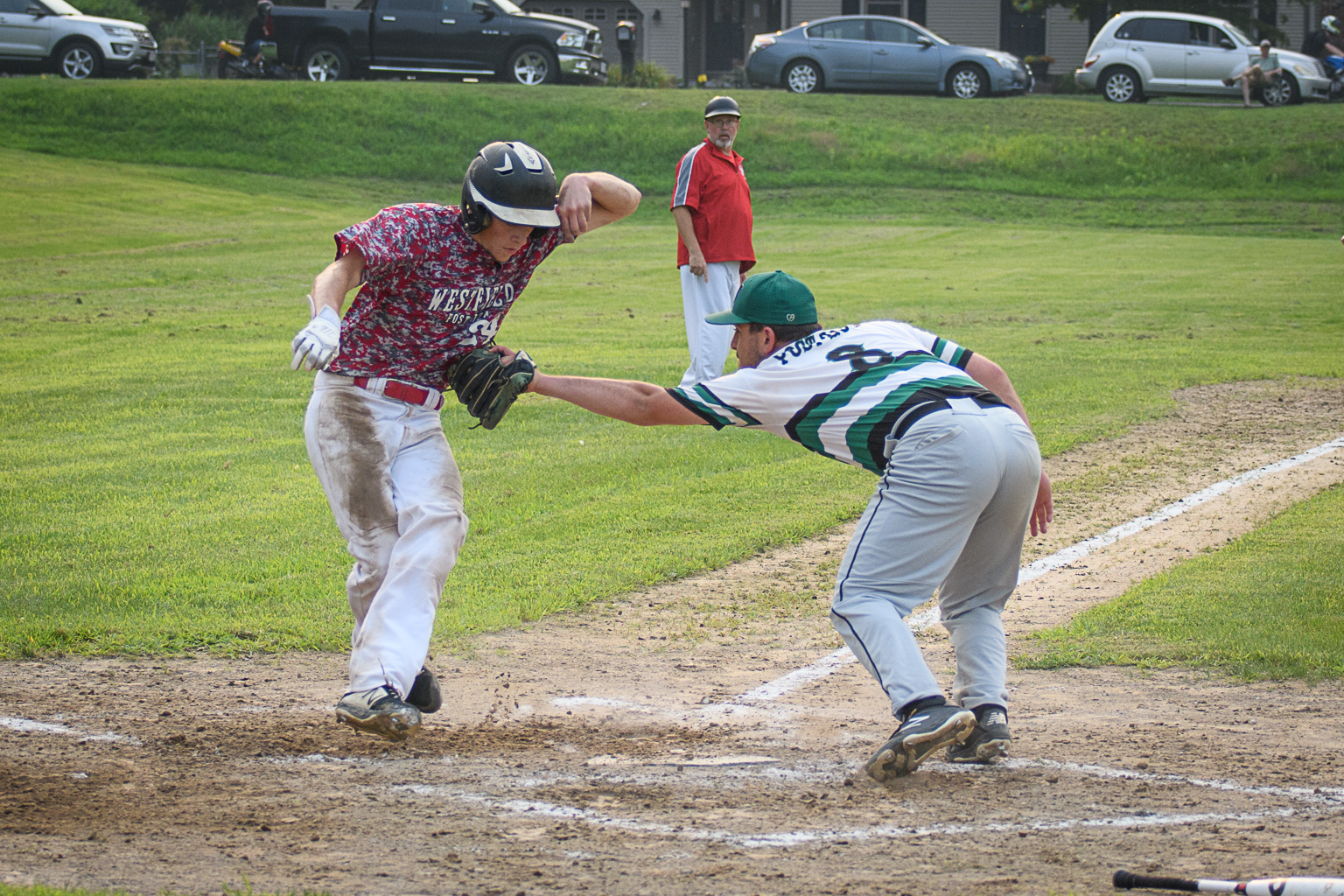 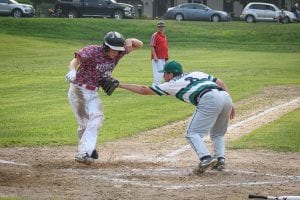 WESTFIELD – Westfield Post 124’s American Legion Baseball season has been short – – you can thank the pandemic and an extended postseason run for Westfield High for that – – but sweet.
Westfield rallied from six runs down to beat Wilbraham Post 288 in a wild-and-crazy American Legion Baseball semifinal, 8-7, Tuesday night at Jachym Field.
Jake Jachym earned the victory on the mound for unbeaten Westfield (9-0). Jachym scattered four hits in four-plus innings of relief, striking out seven batters and walking none.
“It was just an awesome win, great game to come back down 6-0,” Jachym said. “It just shows how we never give up, and how we’re a good team, and we’re here to play.”
The win had special meaning for Jachym. The field is named after his great-grandfather. “It is awesome – – he was probably looking down,” he said.
Wilbraham (7-3) stunned the opposition in the second inning, putting up six runs. A combination of hits, walks, and errors plagued Westfield. The biggest hit, a one-out single from Jake Ferri did the most damage, knocking in two runs for a 6-0 lead.
With one swing of the bat, Westfield chopped the lead in half. Dylan Arooth reached base to begin the second on an infield error. With one out, Jachym belted a double to left center field. Jake Labombard walked to load the bases. Then, Ryan LaPoint smacked a scorching two-run single to the outfield. The relay throw to home plate soared over the catcher’s head and into the fence in foul territory on the first base side, resulting in the team’s third run. Dylan King grounded out, scoring another run.
Westfield kept grinding.
In the bottom of the third, Brody Zabielski and Danny Provost drew consecutive singles. Then, Arooth popped into a fly at shortstop. Little did Arooth know his fly out would result in some positive productivity. Zabielski forced an errant throw toward the third base bag. The ball sailed into foul territory, well out of the field of play, scoring two runs. The game was tied.
Wilbraham wasted very little time in reclaiming the lead. Cade Norris reached on a one-out error to begin the top of the fourth. With two outs, Frank Gullini lofted a booming double to deep center field for a 7-6 advantage.
The wildness continued.
King beat out an infield single to the shortstop with one out in the bottom of the fourth, stole second and third bases, and after drawing an overthrow at third on the stolen base, scored the game-tying run.
In the fifth, Arooth hit a one-out single and Jachym hit a two-out single. A misplay by the outfielder on Jachym’s hit, allowed Arooth to take third. Then, Jayden Rodrigez hit a blooper that fell in front of the second baseman to score the go-ahead run.
Wilbraham threatened to tie or take the lead in the top of the seventh inning. Gullini belted a monstrous hit all the way to the hill in left center field but was thrown out attempting to extend his extra base hit into a triple. Parker Donahue reached on an infield error. Ryan Keating hit a single down the third base line and stole second. Jachym remained steadfast striking out the next batter and forcing a ground out to end the game.
“You got to give these kids credit – – they’re a great bunch of kids,” Westfield Post 124 manager Don Irzyk said. “It’s a core of kids that want to play baseball and won’t quit and they didn’t.”
Westfield advances to the championship Wednesday night at Jachym Field at 5:45 p.m.