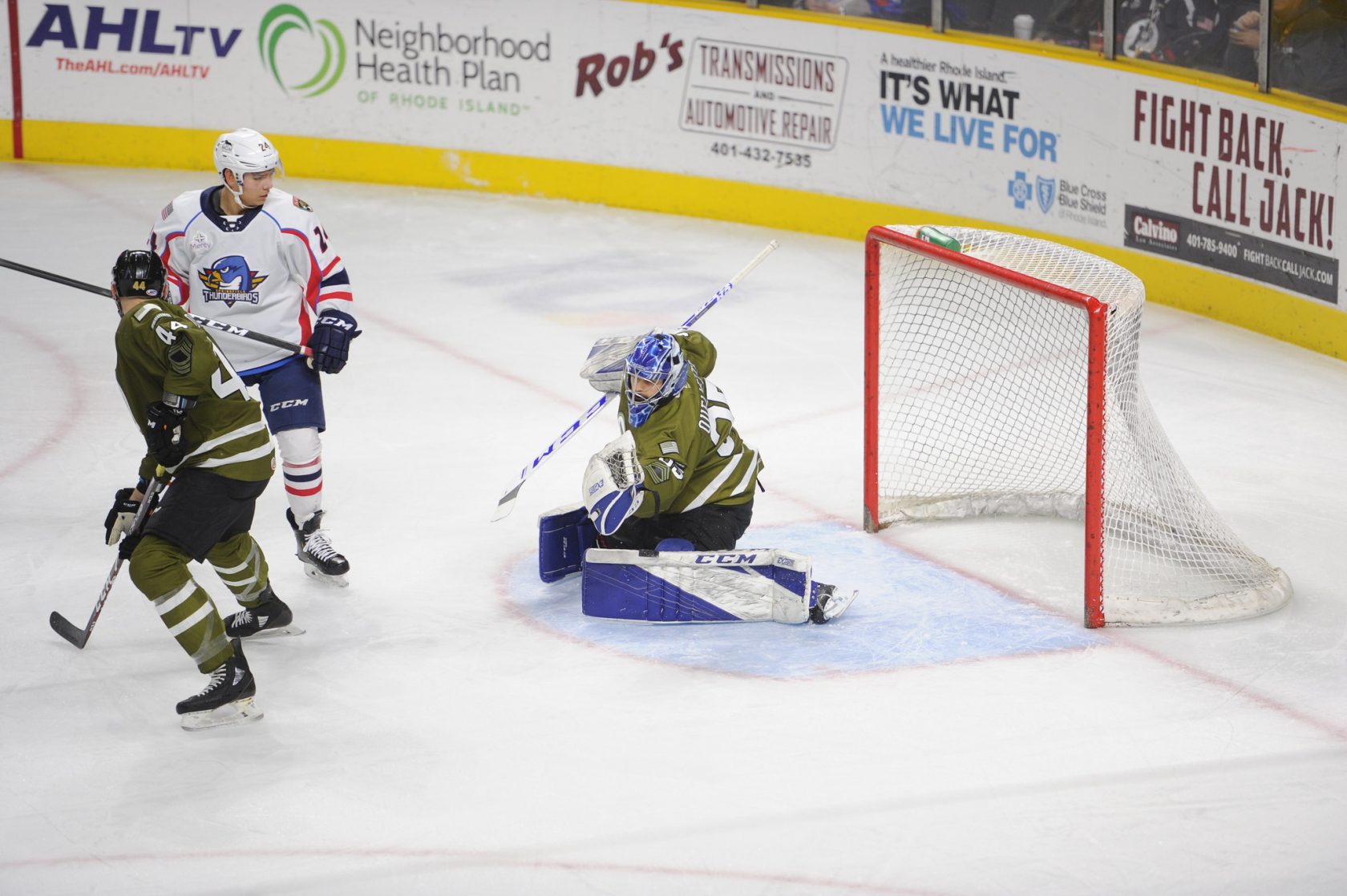 PROVIDENCE, R.I. – The Springfield Thunderbirds (23-18-2-0) completed a spectacular, improbable comeback in the final minute of regulation before stunning the Providence Bruins (23-16-2-2) by a score of 6-5 in overtime on Sunday afternoon inside the Dunkin’ Donuts Center.
Looking to add to a five-game win streak against Springfield, the Bruins wasted no time taking an early advantage, as Jack Studnicka carried the puck into the right corner and slid a pass to Paul Carey in the slot. The Providence captain quickly snapped a wrist shot over the glove of Philippe Desrosiers to make it a 1-0 game just 1:46 into the first.
Desrosiers was under fire in the opening period, as Providence put 17 shots into the goaltender’s crease area, but other than the Carey strike, the T-Birds goaltender held the fort. 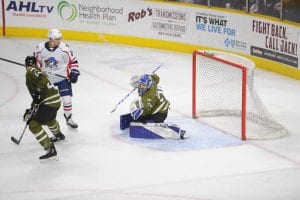 Springfield prevented themselves from entering the intermission scoreless at 18:05, when Rodrigo Abols cleanly won an offensive zone faceoff back to Tommy Cross, and the former Bruin captain slapped the shot through newcomer Bruins goaltender Martin Ouellette to tie the score, 1-1. The goal was Cross’ fourth against the Bruins in eight games in the season series.
Abols then pushed the T-Birds to the lead at the 7:11 mark of the middle period. Ryan Haggerty pulled a puck off the left-side wall and fired a short-side wrist shot at the net with his momentum drifting toward the blue line. Abols stationed himself in the blue paint, where he scooped up a rebound off Ouellette’s pad before chipping it up into the net to give Springfield the 2-1 advantage.
Much like a week ago, however, the Bruins showed a quick strike ability as Brendan Gaunce got the game evened up just 55 seconds later after a Brendan Woods slapper bounced to the ice out of the glove of Desrosiers and right into the crease.
The T-Birds penalty kill was busy in the back half of the middle period, as the Bruins had a pair of man advantage chances to retake the lead, but both times, Desrosiers and the PK battled to survive the threats. With precious time dwindling on the second period, Rob O’Gara would untie the game again with just 5.9 seconds to go in the middle frame, as the ex-Bruin flipped a wrist shot through bodies and underneath Ouellette to give Springfield the 3-2 advantage through 40 minutes.
The third period brought a roller coaster ride of emotions and momentum. The Bruins threatened to spoil the Thunderbirds’ day when Peter Cehlarik tied the game on a power play goal at 5:54 of the third to tie the game, 3-3. A minute later, Carey recorded his second of the game when a loose puck found its way onto his stick in the slot area to make it 4-3 Providence.
The Thunderbirds’ power play failed with a chance to tie the game moments later, and Gaunce popped home his second of the game with 1:50 to go to make it a 5-3 score.
Springfield, however, made sure this day would not go sour. Owen Tippett finally broke through to score in his third consecutive game at 19:19 when he lifted a backhander over Ouellette’s shoulder to cut the lead to 5-4.
After taking a timeout, the Thunderbirds then pulled Desrosiers from the net a second time, and from the right wing circle, Aleksi Saarela ripped a one-timer past Ouellette to stun the Providence crowd and tie the game, 5-5, with just 8.8 seconds remaining.
With overtime separating the T-Birds from one of their most improbable wins ever, Desrosiers had to hold the fort himself, as the Bruins registered the first two shots of the extra period. With 1:20 remaining in overtime, Jake Massie accelerated through the defense and drew a hooking penalty, giving Springfield a 4-on-3 advantage.
The power play began frenetically, with Ouellette diving to the side of his net to stonewall both Paul Thompson and Henrik Borgstrom on point blank chances that could have ended the game. With Ouellete scrambling just to try to get back in his net, Saarela set himself up again and Borgstrom hit him with a perfect pass, and Saarela blasted it home at 4:20 of the overtime to complete the miraculous comeback.
With the win, the T-Birds now sit just two points back of Providence for the fourth playoff spot in the Atlantic Division.
The T-Birds return to home soil for three games this upcoming week, beginning with a tangle with the Hershey Bears on Wednesday night at 7:05 p.m. – Courtesy of Springfield Thunderbirds